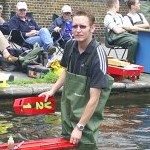 The winners in each class of the of the Straight Running Championship were decided at the weekend. MPBA President Tony Willet has kindly produced this report of the event.

On Sunday September 24th the Southern Area Straight Running Championship finals were held at Welwyn Garden City. It was a lovely warm day with just a light breeze across the top of the course and as normal for this time of the year some leaves on the surface to add a bit of difficulty for the competitors.

The format of the Championships is as follows:
There are a set number of regattas to count towards the Championships. This year we had five plus the final and these were, St.Albans, Victoria, The Grand, Blackheath and Welwyn.
At each of the regattas the score that you achieve on the day is taken forward to the next regatta and so on with a grand total for the finals where you take away your lowest score over the five regattas, the competitor with the highest total score in each of the classes is the Champion for the year.
The total number of competitors during the season in each of the classes was:
Wedge 12, Scale Boats 6, Scale Ships 7, Functional 10, and One Metre 14. The number of competitors was down this year with a total entry of only 6 competitors.

Scale ships Champion: Tony Willett with a total of 114 2nd Dean Reynolds with 107

A very enjoyable championships and final congratulations to the winners.