Club 500 is a low cost route into competitive fast electric racing. Rules are based on standard commercially-available kits with few modifications allowed.

Objective
1. To establish a one class fun racing boat at club level.
2. To ensure that all boats comply with a standard specification, with the intention of ensuring close racing.
3. To promote inter club racing to the following construction limits.

Construction Rules
1. All standard kit parts must be used, except for the aerofoil and dummy motor, which are optional.
2. No modifications or additions to the outside of the hull.
3. The propeller tube bearings may only be replaced by the original replacement component available from the kit manufacturer. The bearings must not be altered in any way.
4. The propeller may only be replaced by the original 40mm M5 propeller, available from the kit manufacturer. The propeller may be cleaned up to remove any manufacturing rough edges. It must not be trimmed to make it a visibly smaller diameter. The use of any other size, such as the X 40mm is strictly prohibited.
5. The battery box must be fitted in the position shown on the building instructions, either permanently or with Velcro tape. It is not permitted for the box to be lowered by cutting-down the plastic moulding. With the battery pack in place, the distance between the highest point of the battery pack and the top edge of the deck coming shall be a maximum of 50mm.
6. The motor may only be replaced with one of the identical specification available from the kit manufacturer. Motors are available of the same external appearance, but often have a different armature winding. These are not legal for Club 500 racing.
7. A 7.2 volt sub C size Nicad or NiMH battery must be used. The battery pack may be constructed from single cells or purchased as a ready-made pack. The battery pack must be constructed in a straight line, either side by side or in two sticks of three cells places together. Cells or packs that have been Performance Selected, designated as High Voltage, Matched, Voltage/Capacity Enhanced in any way, are PROHIBITED.
8. A BEC receiver may be powered from the main drive battery. Motor control can be either a servo/micro switch combination, or an electronic speed controller.
9. A Velcro strip (hook side) measuring 20mm x 70mm must be attached to the flat section of the cabin roof for race number fixing (number to be supplied at race meetings).
10. A self adhesive foam rubber strip of at least 3mm thick must be attached to the bow of the boat.

Construction Recommendations
1. It is strongly recommended that the access hatch in the deck moulding, is cut out in such a way that it is made as a removable cover. This can then be taped down during a race to render the entire hull watertight. The water drain hole shown on the instructions is not required.
2. Internal reinforcement of the hull is recommended, particularly around the rudder tube and bow seams.
3. The addition of silicon and plain washers to the rudderpost will make the tube/post assembly watertight.
4. The addition of metal thrust washers to the propeller shaft is permitted.
5. The propeller tube may have an oiling tube attached.
6. The motor/shaft coupling should have the brass components glued or pinned into the universal joint section.
7. The part of the motor mount in contact with the motor should be covered with strips of self-adhesive thin foam tape, such as wing seating tape used for model aircraft. This prevents motor slip.
8. Buoyancy should be added, i.e. airbags or foam.

Racing Rules
1. Race duration shall be 4 minutes, plus seconds to complete the lap you are on. (Maximum time to complete the last lap is 60 seconds).
2. Race number boards must be attached to the cabin roof. (Number boards will be supplied at race meetings).
3. The course shall be an ‘M’ shape approximately 30 x15 metres, negotiated in an anti-clockwise direction.
4. A maximum of 9 boats per heat.
5. A boat may only be run by more than one competitor, if one is a senior and one is a junior.
6. Starting procedure: Boats shall be placed in the starting gate. Drivers will be asked if they are ready. They will then be informed that the race will start within the next 10 seconds. The race will start on a blast of a whistle, or the word ‘Go’. The first buoy to be negotiated is the centre of the ‘M’. The race is over on the second blast of a whistle, or the words ‘Race Over’.
7. Race Marshals shall record missed buoys. A time penalty is to be imposed in each race for missed buoys, 5 seconds for each of the first two offences, then 1 lap deducted for each offence thereafter. The circling of buoys is banned, to minimise damage to any of the boats.
8. At the end of 4 Minutes a seconds count will start. Boats will complete the lap that they have begun, and the lap scorer shall record the time in seconds when the boats next cross the scoring line.
9. The Rescue Boat may be used during a race if boats are in danger of sinking. Colliding with the Rescue Boat means immediate disqualification from that race.
10. Drivers of ‘dead’ boats must inform fellow competitors immediately of the position on the course where their boat has stopped, using the words ‘Dead boat, top left’ etc. Hitting a dead boat, once it has been called, also means immediate disqualification from that race.
11. Scoring: – Points will be awarded for the highest number of laps and part laps from one race in a regatta. The points will be: – 50 for the highest lap score,40 for second,30 for third, 20 for fourth, 10 for fifth and 5 for all other competitors who entered. The end of season results shall be a total of the four highest regatta scores during the season.
12. Competitors can expect to have their boats scrutinised by the Race Officer at any time during race meetings. The Race Officers decision is final. 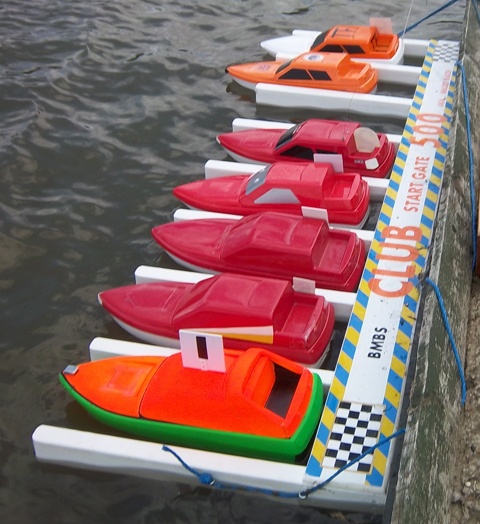 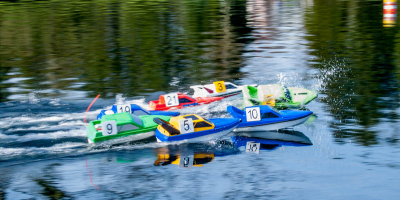 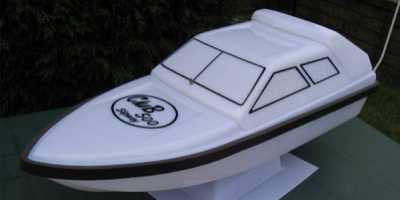