You go out on a clear day thinking you’ll get some great shots of the days racing and most of your pictures end up looking blurred or fuzzy even though you’re wielding a grands worth of DSLR. The camera must be useless right? Unfortunately it’s not so clear cut.
The main problem is light, or lack of it. What looks perfectly clear to the naked eye is like a candlelit room to the sensor on a digital camera. A typical overcast English Sunday is not a friend to your camera. Adding to this, the reflections off the lake pose a serious challenge to the (fairly) dumb mechanism inside the camera that decides what the ‘average’ light level is as it exposes a frame.

As the name implies, a racing boat is travelling pretty fast. In order to ‘freeze’ the action, the photographer can take one of two approaches : He can set a high shutter speed of 1/800th of a second or faster, or he can try to smoothly follow the boat and match it’s speed to his ‘panning’ action. Both of these methods present their own difficulties. Let’s look at the high shutter speed first.

In the ‘olden’ days of 35mm film, you could buy the little film canisters in different ‘speed’ (ISO) ratings, ranging from 100 to say 1,200. This number represented how fast the film reacted to light, with 100 being the slowest, 1,200 the fastest. The ISO speed also determined the size of the ‘grain’ in the film and had a big impact on the final quality of a picture. Fine grained 100 ISO film, would produce a much higher quality image than 1,200 ISO but at the expense of requiring a much longer exposure (Shutter speed). In a digital camera, the ISO number can be set manually or the camera can do it itself. When left to its own devices, there is nothing to stop the camera setting an insanely high ISO in order to get the correct exposure for an image and you’ll end up with a correctly lit, but fuzzy image. A modern DSLR will produce decent images up to about 400 ISO with only the very top (And very expensive) models producing acceptable results beyond 400. On an overcast day, you will need to use at least ISO 400 to achieve a fast shutter speed. ISO 100 will only allow you about 1/250th of a second and that is not fast enough to freeze a boat in motion. So you’re compromised by the light.

Or you could try panning.

Panning is an art. Thank heavens for digital cameras with their ability to delete poor quality images without having to go through the time and expense of ‘developing’ the film. Panning takes a lot of practice. In attempting this technique, you’ll end up throwing away more images than you keep. Panning allows you to use a much slower shutter speed as the camera is swept from left to right matching the speed of the boat. Sounds easy? Nope. You have to do this in a very smooth motion and release the shutter mid-sweep, following through to get the most stable pan effect. Getting this right is rewarded by sometimes stunning images with the boat in sharp focus and the background blurred, enhancing the impression of speed.

1. High Shutter speed stops the action. This incredible shot of Filip Tin Pazins 15cc boat at the 2016 iMBRA World Championships even captures the detail of the broken rudder falling into the water (Bottom right of shot). 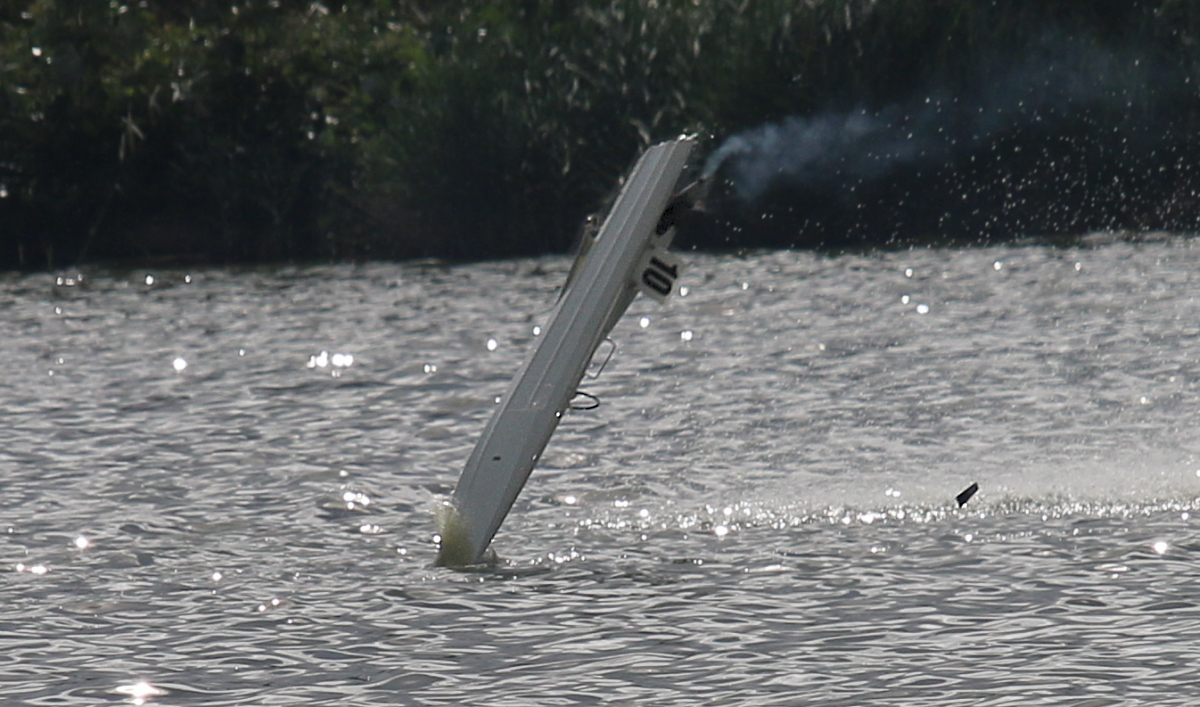 2. Slow Shutter speed conveys the impression of motion. This is a great panned shot of Ian Folksons 27cc boat at Peterborough 2017 in the National Drivers Championship. It has an almost dreamlike quality to it. 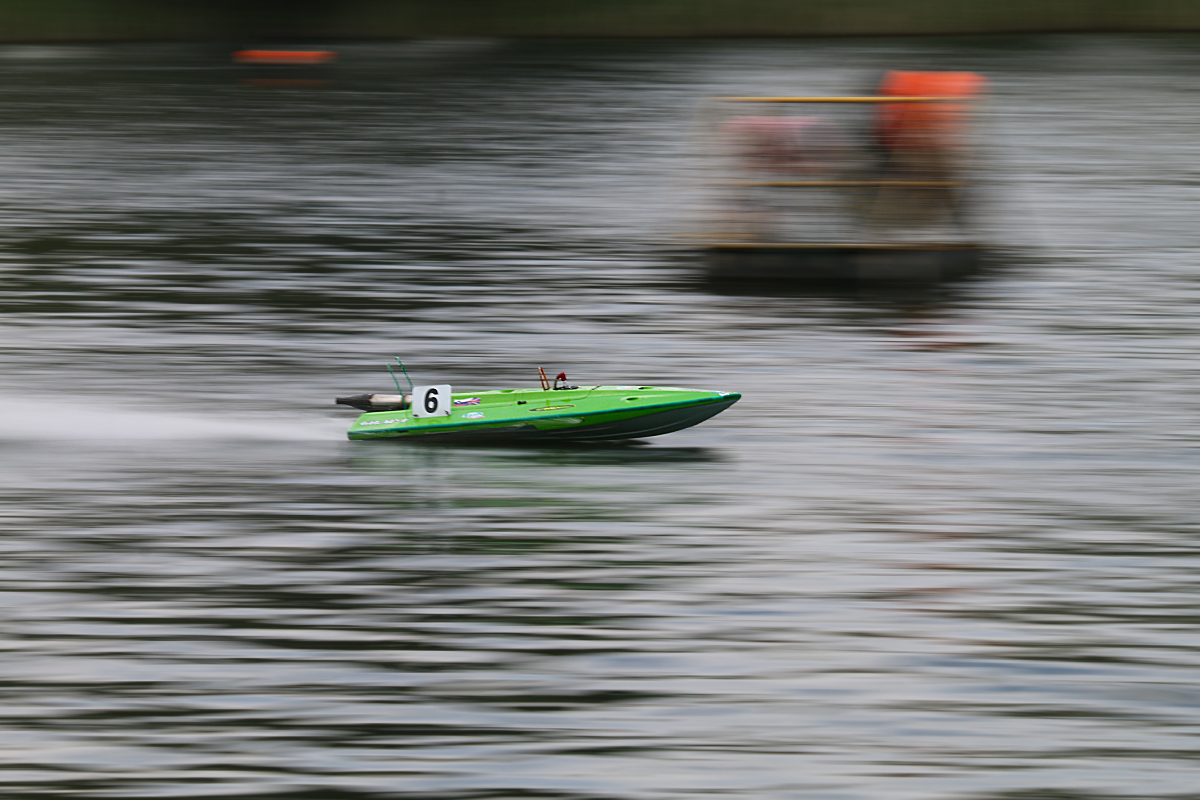 3. Burst Shooting is another technique you can use to tell the story of particularly dramatic incidents during a race. This involves setting the camera to continuously capture shots as long as the shutter button is held down. Burst shooting is dependent on your cameras specs. A mid-level DSLR can be expected to have a burst rate of around 5 frames per second, with the more expensive models able to shoot 7 frames per second or more. A pro sports journalist camera like the Canon 1DX can do 14 frames per second, but it costs 5 grand without a lens! Burst shooting can be a bit hit and miss. You need to know your subject. Watch for several boats all approaching a turn together, or know who the particularly crash-prone drivers are!
7 frame burst on Canon 70D DSLR showing Martin Hillsteads spectacular crash at Billing GB International 2016 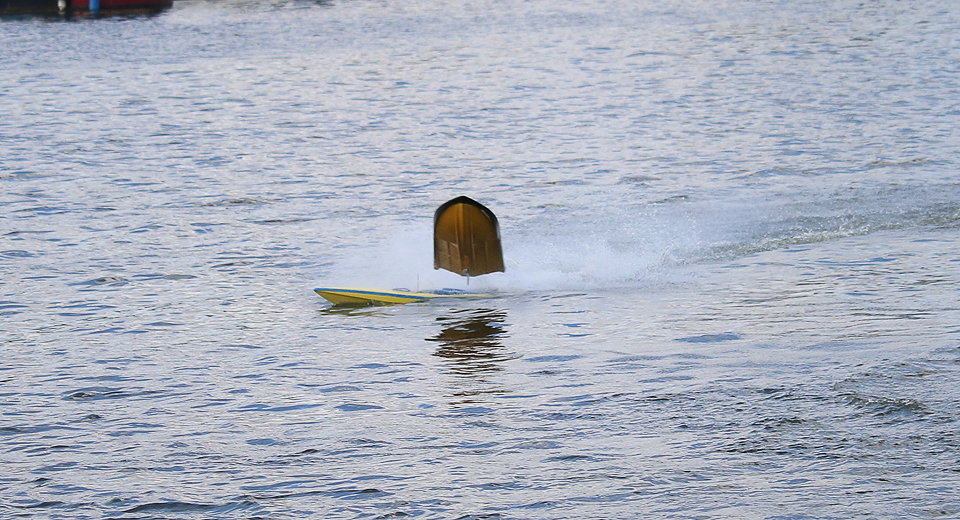 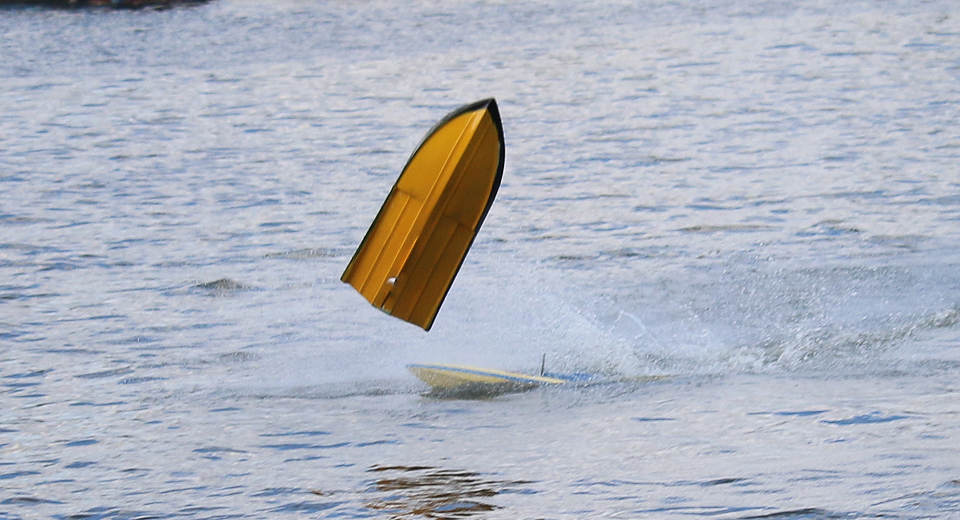 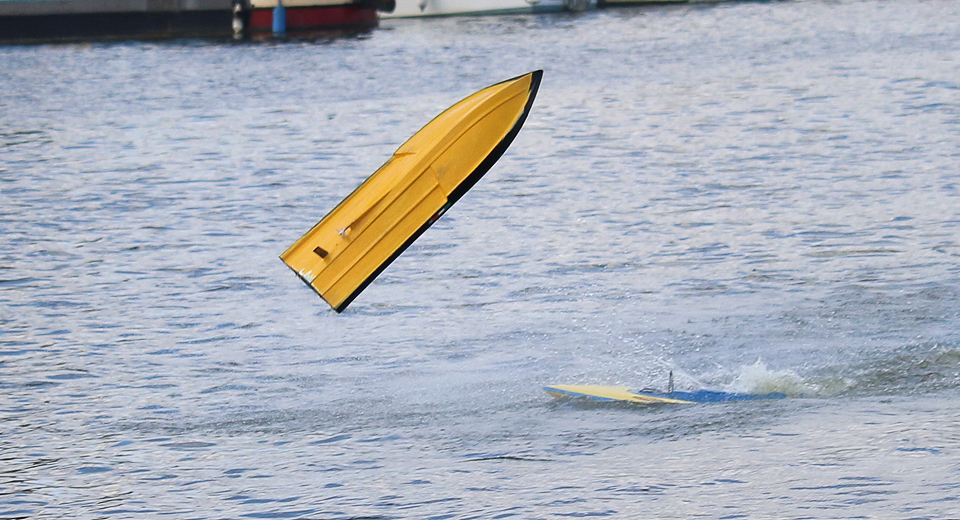 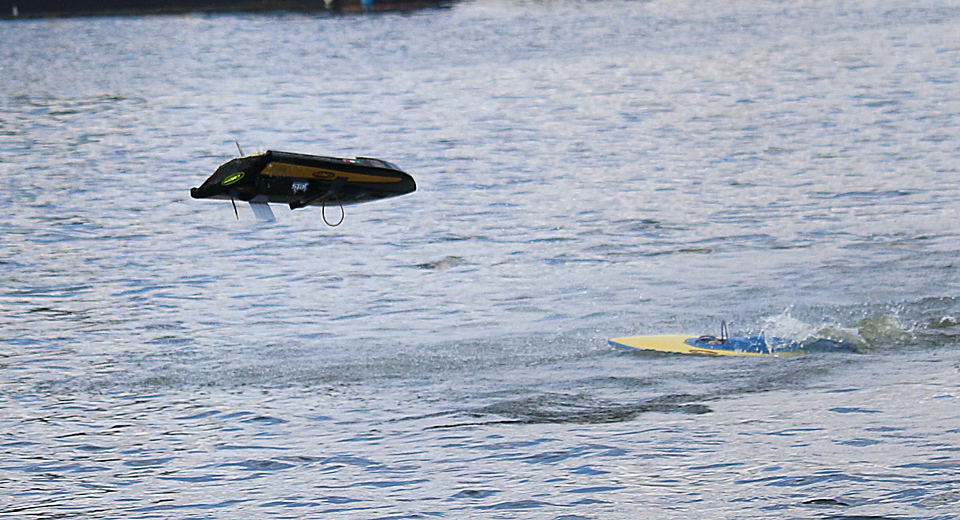 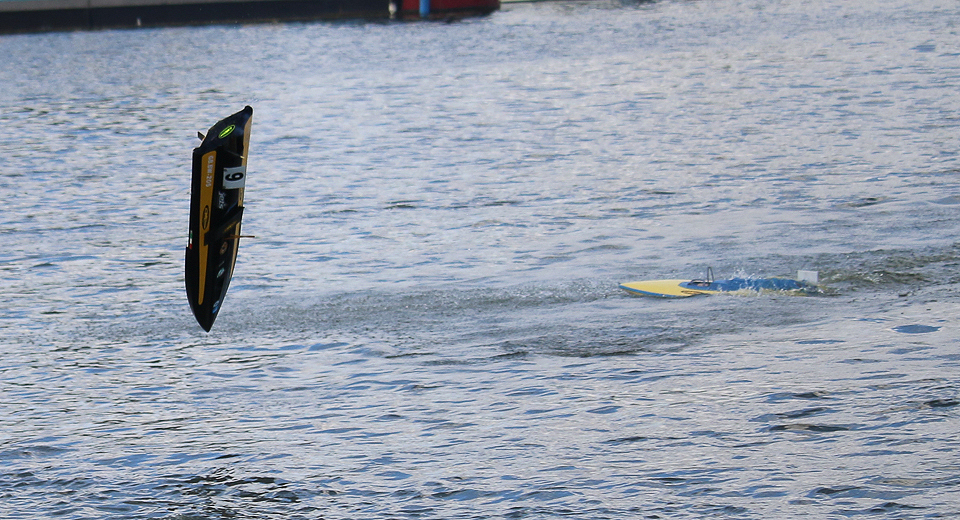 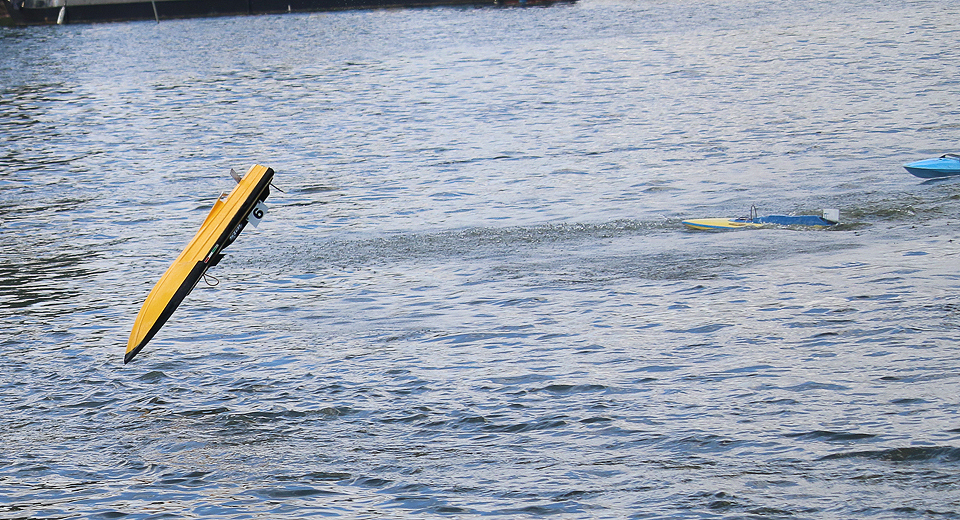 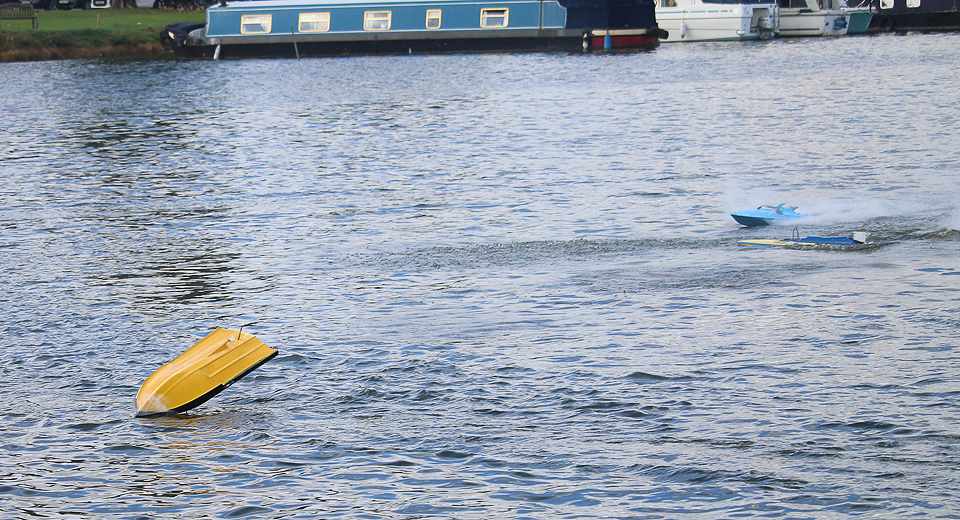