Andy Coburn is the only driver with a 100% record in the National Drivers Championships – Entered once and won it using tactics of consistently finishing races. He is also the MPBA webmaster and Multi Section Press Officer, so this profile naturally only contains the good stuff!

Andy works in the city as a database programmer for banks and fund management firms and uses this knowledge to design and develop the MPBA Website and various Facebook pages. He has been boating for 45 years, starting as a junior in Scale Steering at VMSC in the 1970’s. He lives in North London and has a teenage daughter. They are both big rollercoaster fans and visit Orlando every year to ride all the big coasters. Andy is also a keen photographer and many of his spectacular shots of multi racing can be found on this website and in the Facebook Group FSR Photos.

Whilst admitting to not being an expert mechanically, Andy is well aware of the benefits of preventive maintenance, having learned this from World Champion Ian Folkson and did not suffer a single mechanical breakage in his title winning season, which is quite rare for the 3.5 class.

Andy has now decided to emulate Nico Rosberg and retire from Endurance racing, having set a record that is unlikely to be surpassed. He is now devoting his time to bringing you all the latest news and photos via the MPBA and iMBRA websites and social media. 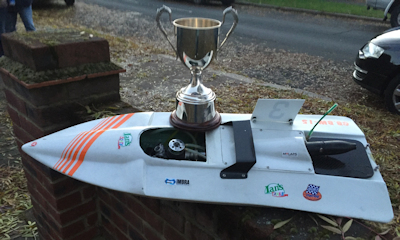