Mike was the 2009 MPBA 15cc National Drivers Champion. Mike got into model powerboating in a unusual way, so we’ll let him tell it in his own words: 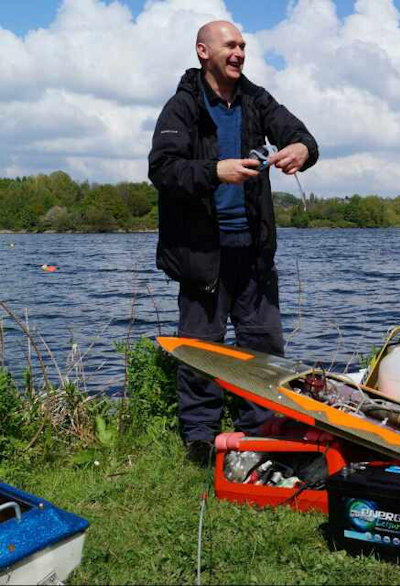 “Many years ago in my early teenage years I was interested in model car racing. I had been on a week long family holiday with my parents to Primrose Valley, a caravan park near Scarborough on the East coast. It was advertised in a RC model car magazine as a week long models week incorporating RC car racing and aeroplane flying of many different types at various locations nearby. Also unknown to me was model boat racing on the lake which I later discovered by chance and enjoyed watching these wedged shaped fast moving projectiles. I later found out they were multiboats.
I basically had a French made buggy called a “Siccom Magnum” that unfortunately I could no longer get much needed parts for. It was fitted with a OPS 21 engine which at the time was the engine to have. So now I had a buggy engine not being used and had also decided I no longer wanted another buggy, so after reading my very nice OPS engines catalogue again, I worked out that all I needed to do was to purchase a water cooled head and other bits for my buggy engine. After converting it, I then bought my very first boat, a Prestwich Marlin including gearbox and other bits. I never raced it though, as just enjoyed going to Eastpark in Hull with it. That’s also how I met many of my good friends I have to this day. So in all, for me personally, it’s not about the racing as such, but just the enjoyment of being with like-minded people who I enjoy being with.
Later on I decided like most do, to have a faster boat, so then bought a CMB90 gold top. A lovely powerful and ultra durable performer. Fitted that into a original Prestwich Tornado. After many years of only ever going to a few races a year with it, I decided that I finally had the time to do the whole championship in 2008, where unexpectedly I become runner-up. So in 2009 I then entered nearly every championship race and became drivers champion. So not a bad effort considering my Tornado was now at least ten years old and at the time looked like a right ugly unloved shed. I could not have won that without my trusty friends who I had met at East park when I was just messing about on the water lol. So I dedicate that win to them.”