This is the first of a series of interviews with some of our most successful members in National and International competition. In this article we talk to FSR-Endurance (multi) racer Zack Humphries. Zack is the current 3.5cc World Champion in 3.5cc also having won the title in 2014, 2016 15cc Silver Medallist, current IMBRA 3.5cc European Champion, winner of the last 2 IMBRA Western Leagues in 3.5cc, 15cc winner at the 2016 van Marle International, 2nd in 15cc Haarlem 2018. 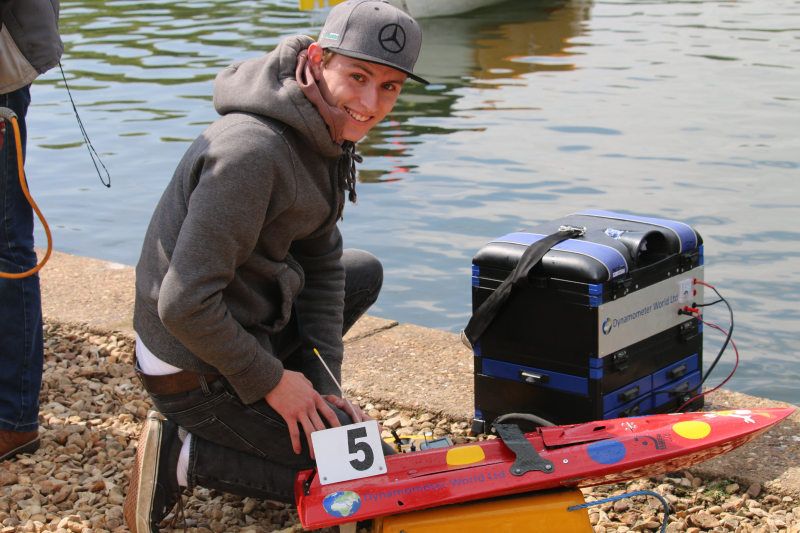 MPBA: How did you get into model boating?
Zack: Through my Mum and Dad, they’ve been racing for about 27 years. They had a small break whilst my dad started the family business and the boats were put away under the stairs… then I for some reason was searching for something and saw them (yes they had blue roll and were inside bags) and said why don’t you both start doing it again!
MPBA: Have you tried any other forms of model boating?
Zack: No, but I have built a 3.5cc Hydro for my secondary school.
MPBA: Can you remember your first win and how did it feel?
Zack: I can’t remember my first win as such. But my first race was as a junior at the Naviga World Championships in Italy 2008. I made the A-Final and finished in 3rd place. So that for dad, mum and I was incredible! Mum was in tears…. there’s pictures of this!! Editors Note – Yes there are. Here’s one.
MPBA: How about your first big win?
Zack: My first big win was at the 2014 IMBRA World championships in 3.5cc at the age of 20. That’s the first one I really remember.
MPBA: First International win?
Zack: Besides the world championships in 2014, it would have been the British international in the 3.5cc 2014.
MPBA: What’s your proudest moment so far in your racing career?
Zack: Contrary to what most people would probably say; I’d have to go with the 2016 IMBRA World championships finishing 2nd to Sebastian Videmont. I gave absolutely everything I had in the last few laps and even though I crashed on the last corner attempting my only possible chance to pass, it was one of the greatest races I’ve had. Video (Watch from 10:46 for the incredible last throw of the dice attack from Zack).
The other choice is at the Naviga 2015 world championships, a 3.5cc Heat. The boat wasn’t running cleanly and we hadn’t got the speed. I was in 5th place and hadn’t been able to get past any of them for the full 20 minutes. Then the whistle went; and it was like I found a second gear and had the eye sight of an eagle. I over took all four boats in front of me between centre buoy and the transponder wire. Finishing 1st in that heat!!
MPBA: What’s your favourite class to race in? Why?
Zack: Difficult. 15cc is the blue ribbon class. However, the technical ability required for 3.5cc is immense.. I’d still have to choose 15cc though.
MPBA: Let’s talk about equipment. What ingredients make a successful multi boat?
Zack: Being well setup up on the day, with attention to detail during preparation.
MPBA: How much difference does the driver make? What about the pitman?
Zack: Let’s start with the pitman. I can’t really comment too much on this, I’ve always had my Dad and would choose him over anyone. He knows the way I think and drive. I’d say the pitman is about 40% of the final result. Without them your job would be very hard as a driver. Therefore we rate the driver as 40%, leaving 20% for luck. For us; it’s not him or her. It’s always been us, as a team.
MPBA: What equipment do you currently use?
Zack: We use an assortment of gear but the majority of our equipment is from OS Engines, Multiplex, and Prestwich Models.
MPBA: How do you get more performance out of an engine?
Zack: Contact Zack Humphries at Dynamometer World.
MPBA: Any new builds on the Horizon?
Zack: Typically we build a new boat every year alternating the classes. So not yet!
MPBA: Who do you consider your biggest rivals?
Zack: There are many big names and that’s too hard to choose. Editors note – See World Champions for our opinion.
MPBA: What is it with you and blue roll?
Zack: It’s probably a question that’s best answered by my Dad. It all started years ago, we used blue paper to cover the engine bay so that no dirt or contaminates would enter the boat. It seems to have been extrapolated into this secret hiding blanket…. or is it? I’m sure now someone’s inventing X-ray glasses specially for blue roll… but don’t worry, I’ve already designed a frequency jammer if such a problem arose.