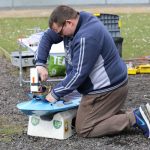 Testing is crucial to prepare for a racing season. By midway through the first decade of the 21st century, a typical Formula 1 testing programme had become a major exercise in both manpower and logistics, with many teams using multiple test drivers to take a share of the burden away from the race drivers. Conscious of the spiralling costs, which invariably resulted in development work that was invisible and meaningless to fans, Formula 1 racing’s governing body began to impose increasingly stringent testing restrictions.

There’s no such restriction in model boat racing however, and the most successful racers will have tested extensively before the season starts, and do so continuously throughout the season. Importantly, this testing needs to be focused, evaluating one change at a time. We have seen racers run lap after lap of ‘testing’ with the only end result being more wear and tear on the boat and it’s components. We also see some racers making multiple alterations in one go and end up not being sure which change worked and which did not.

Weather and water conditions play a major part in boat performance. In the UK, pre-season tests are typically done in outside temperatures of 10deg C or even less. This has a major impact on engine performance, often resulting in less than optimal combustion temperature in high nitro content fuelled boats. Thus, successful testing is mostly comparative by nature rather than measured on say outright speed. 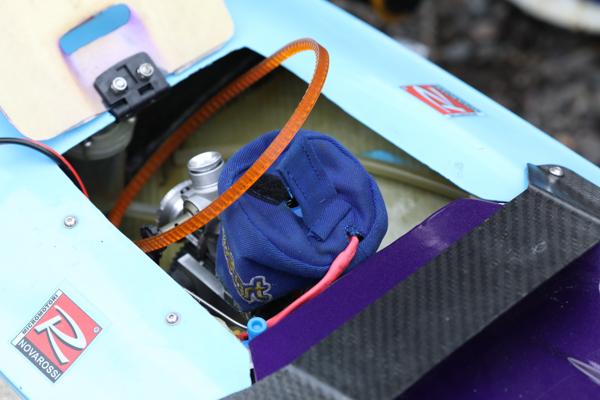 Endurance racing is all about lap time. The goal is to consistently produce low lap times. A boat that can corner quickly with little or no loading will generally beat the boat that has a couple of extra km/h down the straight but bogs in the corners. So you will typically start by trying to build a boat with low weight to achieve the highest power/weight ratio. You then perform comparative tests to determine the best gear ratio and propeller combination, together with fuel/air mixture, compression, tab settings and tuned pipe length.

The more sophisticated (And expensive) radio control equipment now offers real time telemetry including engine revs, temperature, battery level and speed via GPS. GPS speed readout is an invaluable tool for evaluating performance. There are limitations to GPS in that it is not always a true reflection of outright speed so it is best used for comparative testing at the same location. A key performance consideration when choosing a GPS telemetry system is the frequency of update as an endurance race is run on a relatively small (In GPS terms) course. Popular systems include Multiplex, Futaba, FrSky and HiTec

Some of the main things that you might change in testing are:

So in conclusion, there are many parameters and components a racer can change on his boat and it is by methodical one step at a time testing that optimal performance will be achieved.