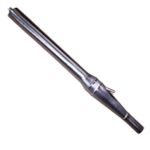 Thanks to Dave Marles at Prestwich Models for this article.

You know that changing the exhaust pipe and pipe length on your boat can have a marked effect on the engine’s power characteristics, but do you by how much and why? A two stroke 125cc engine with standard exhaust system can combust no more than 125cc of fuel air mix. A two stroke 125cc engine with good tuned exhaust system can combust approximately 180cc of fuel air mix.

Simply put, it’s because the two-stroke exhaust system, commonly referred to as an ‘expansion chamber’ uses pressure waves emanating from the combustion chamber to effectively supercharge your engine.

The speed of sound 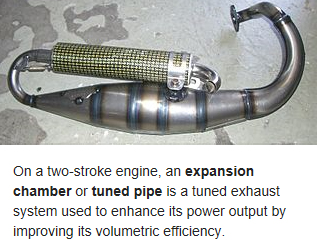 In reality, expansion chambers are built to harness sound waves (created in the combustion process) to first suck the cylinder clean of spent gases and in the process, drawing fresh air/gas mixture (known as ‘charge’) into the chamber itself and then stuff all the charge back into the cylinder, filling it to greater pressures than could be achieved by simply venting the exhaust port into the open atmosphere. This phenomenon was first discovered in the 1950s by Walter Kaaden, who was working at the East German company MZ. Kaaden understood that there was power in the sound waves coming from the exhaust system, and opened up a whole new field in two-stroke theory and tuning.

An engine’s exhaust port can be thought of as a sound generator. Each time the piston uncovers the exhaust port , the pulse of exhaust gases rushing out the port creates a positive pressure wave which radiates from the exhaust port. The sound will be the same frequency as the engine is turning, that is, an engine turning at 24,000 rpm generates an exhaust sound at 24,000 rpm or 399 cycles a second, hence an expansion chamber’s total length is decided by the rpm the engine will reach, not displacement.

Of course those waves don’t radiate in all directions since there’s a pipe attached to the port. Early two strokes had straight pipes, a simple length of tube attached to the exhaust port. This created a single “negative” wave that helped suck spent exhaust gases out of the cylinder. And since sound waves that start at the end of the pipe travel to the other end at the speed of sound, there was only a small rpm range where the negative wave’s return would reach the exhaust port at a useful time: At too low of an rpm, the wave would return too soon, bouncing back out the port. And at too high of an rpm, the piston would have travelled up the cylinder far enough to close the exhaust port, again doing no good. Indeed, the only advantage to this crude pipe system was that it was easy to tune: You simply started with a long pipe and started cutting it off until the motor ran best at the engine speed you wanted.

So after analysing this cut-off straight-pipe exhaust system, tuners realized that pressure waves could be created to help pull spent gases out of the cylinder. Following this, The tuners realised that these pressure waves could be utilised still further by using a divergent cone to increase the strength of the negative wave and then that a convergent cone added to this would increase power still further as explained next.

The front cone needs to be long enough to generate a wave to help the fresh mixture into the cylinder but it also needs to continue working long enough to allow some fresh mixture into the first part of the header. This is the mixture which will be forced back into the cylinder. If it is too short, then it does not allow mixture into the header. If its too long, then it reduces the length of the rear cone and that needs to be long enough to force all of the unburnt mixture in the header to be forced back into the cylinder. The pressure wave continues into the rear cone and immediately sends a positive pressure wave (laws of physics!) back down the tuned pipe towards the exhaust port forcing the unburnt fresh mixture back into the cylinder. The strength of the wave increases as the rear cone gets smaller and the length is made so that the returning pressure wave from its very end at the junction with the stinger coincides with the point of exhaust port closure. When this most critical length (start of stinger to exhaust port) is correct, then maximum power is achieved. If this critical length is too short then the returning wave forces hot gases back into the cylinder, dramatically increasing cylinder combustion temperatures. If this length is too long the maximum power will not be achieved because maximum supercharging or cylinder filling will not occur, although power in the corners will be better because the tuned length will coincide more with the reduced rpm in the corners.

In conclusion we can see that the front cone length and distance from exhaust port is very important to achieve maximum cylinder filling and to pull some mixture into the header and the distance from piston to start of stinger is extremely important to get maximum filling (supercharging) of the cylinder. When we adjust the tuned pipe length on our engines we are moving several things at once, the start of front cone, the end of front cone, the start of rear-cone and the end of rear cone/start of stinger.

The tuned length L as shown in the diagram is the length that most people use as a comparison. This is OK as a comparison but the length that is most critical is TL. Many different pipes can be used on an engine but that tuned length TL will always remain the same within a few millimetres for a specific rpm (if all other factors remain constant, nitro content, oil content, air density, temperature etc). This applies to all two stroke model engines , petrol (gas) or Glow powered (nitro). We know this from many bench and on the water tests conducted on many different engines. To elaborate: If you were running a tuned pipe at its optimised length (the length that is giving most power or speed) and that pipe had no flat in the centre section and you wanted to change to a pipe with a flat in the centre or belly section. You should measure TL on the old pipe and then set TL on the new pipe to the same length to give you a starting point for adjustment.

If you can measure the rpm of your motor and exhaust timing, then you can use a simple calculation to show how much you need to change the pipe length when altering ex timing and rpm.
Here are some simple calculations for gas engines where the exhaust gas temperature is not affected by nitro content.
(For these calculations you can measure the pipe length between whatever points you want to, but the norm is from plug to widest part of cone.)

If you take a boat that is running well and pipe length has been optimised then to alter rpm or exhaust timing the following calculations may help to find the new required pipe length. 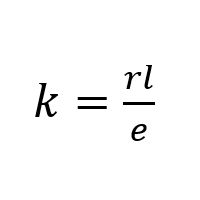 Firstly you work out the constant for your set up. So..

In this example that would give a K number of 28286 and as I wrote before, K will remain the same whatever you do.. 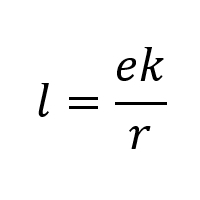 Which is the new pipe length from manifold face to widest part of cone.

This would make the new pipe length 309mm.

If you wanted to increase exhaust timing to 180 degrees and run at 15,000rpm then

Stinger length should be separated from stinger diameter because although they are linked, in practice you would need to make a big change in stinger length to affect the backpressure. Stinger diameter is crucial to the pipes operating temperature and hence the power production. If the stinger is bigger than optimum them making it even bigger will have little effect but by sleeveing it down then you will be able to find the size that gives best power. Normally a smaller stinger will improve top end power because the exhaust gas temperature will increase which will have the effect of a shorter pipe length. If you go too small on the stinger then power will suddenly start to drop in the corners and the motor will begin to overheat. To get the best power its usual to lengthen the header and make the stinger smaller to get the best overall performance. A bigger stinger will have the effect of spreading the power band but the engine will not make the same peak hp.

Stinger length is important because its part of the pipe resonance. The wrong stinger length will reduce performance at the upper end of the rpm band. i.e. between peak torque and peak bhp.. There will be maybe one or two stinger lengths that will cut the rpm off at a certain level reducing the ‘overrev’ which gives the best top speed. There will be one stinger length which gives the best overall power and over-rev. I find no way to calculate that stinger length, trial and error is the only way. It’s not dependent upon engine size, just on the pipe design. For example, my best .21 pipe runs over 100mm stinger but my best .90 runs around 60mm. One thing though, very short stingers up to 20mm long don’t normally work and extremely long stingers of 150mm to 200 mm can work very well. Once the best stinger length is found, it does not seem to vary if the pipe length is altered.

On stinger length, it is only a few percent performance difference but every little helps!!

The speed of sound within the exhaust system is dependent upon the EGT (exhaust gas temperature). The higher the temperature the longer the pipe length must be for a given rpm. EGT will vary with the following factors:

The volume of a pipe is only really related to the displacement of the engine because the various diameters of the pipe ( header, belly and stinger) are a function of exhaust port area, and if an engine has a bigger displacement, it usually has a bigger exhaust port area. It’s often said that a bigger volume pipe is less peaky or it has a broader spread of power. This is not actually so. The volume takes care of itself when the pipe is calculated. The important things are firstly (and most importantly) the length from piston face to start of stinger and secondly header length, cone lengths, belly length, and then header diameter, belly diameter and stinger diameter.

Again thanks to Dave Marles at Prestwich Models for this article.