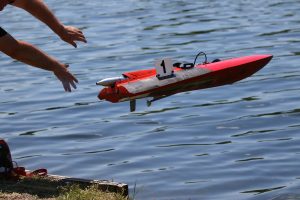 A terrible forecast of rain and thunderstorms could not have been more wrong for the 2nd iMBRA Western League race of 2022. It barely rained at all and we basked in roasting sunshine on the Saturday with the other 2 days both bright and sunny if a little cooler. Therdonne is a straightforward drive down the A16 from the Calais Eurotunnel terminal taking just over 2 hours in my little Hyundai i10.

The Brits suffered mixed fortunes. Zack Humphries continued his winning streak with 1st place in 3.5cc after an incredible battle with Sebastien Videmont of France. He wasn’t unfortunately able to repeat the same heroics in the 15cc after a spin put paid to his chances. Fellow Brit Robert Daniel made the 3.5cc A final and finished 8th. Robert unluckily missed out on the 7.5cc A final after a penalty and transponder issues. David Humphries took a respectable 5th place in the 7.5cc A Final with the first race of his CMB 45 M-Line powered Drakkon. Dave Marles and Phill Fields were both out of luck this weekend.