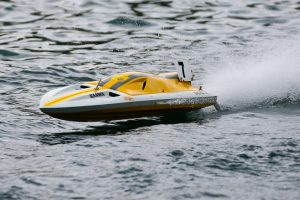 Round 3 of the MPBA 2022 Circuit Championship was held as usual at Elmbridge Model Boat Club. Next Circuit race is on the 10th July, the last event before the 2022 iMBRA World Championships in Konopiska, Poland.

As usual, the organisers would appreciate it if people booked in as soon as they know they are coming. I could not stay for the whole day on Sunday, so the following report is from Grahame Morgan.


Having just held our annual Circuit Section Nationals I thought I would write a short report of the event.

Having had the Multi section Masters event on the Saturday 11th, the Circuit event was on the Sunday 12th. With good weather we were set for a good day of racing. Numbers were very much down this year. This resulted in there not being a 3.5 hydro race. The 15 hydro, 7.5 & 15 offshore classes only had 3 competitors each. Luckily the 35 offshore had a good entry of 10 racers. This is turning into a very popular class.

Racing got under way at at around 10.30am, which is early for us but bode well for an early finish. However, throughout the day we had delays, this was mainly down to low numbers, having to wait while boat issues were sorted to enable the maximum number to race. It’s always disappointing to see so few boats start a race but worse still that none finish. Then as the day went on attrition took it’s toll & numbers dropped again. Luckily the 35 offshore class put on a reasonable show. With some new competitors entering, this class is looking up. During the heats there were some fallers, I think more from water conditions than anything mechanical, as with 10 boats the water did get a bit choppy.

By the time of the prize giving it was quite late on & some who had long journeys home had departed, we still have your trophies.

I hope you all had a good day & got home safely, Thanks to all who turned up & to those who helped out during the day to enable racing to go ahead.

Thanks also to the members of the host club, Elmbridge for supporting the event & catering for the masses, much appreciated.

One last thing, the section on your behalf spent £495 on trophies (everything has gone up in price) for this event. Entry fees did not come anywhere near covering the cost even before we had paid Elmbridge for use of lake. A vote was taken at the prize giving where it was agreed that this sort of money, given the low turnout was too much. So for next time there will be some prizes that will be of the consumable type, drinkable & edible.

Well that’s it, hope you can all make the next meeting which is on the 10th July.
Grahame

As Graham said, a little less attrition would improve the racing.