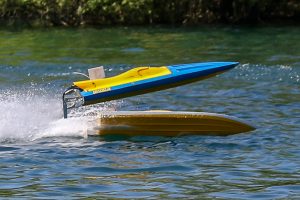 Round 2 of the MPBA 2022 Circuit Championship was held as usual at Elmbridge Model Boat Club. A much better entry this week and we basked in glorious sunshine T-Shirt weather for a good days racing. With so many heats to get through in a circuit meeting – 9 classes x 4 rounds – means you have to minimise your transition time between heats. This wasn’t quite as swift as hoped for today 😉 so this event was cut short at 3 rounds so we could get away at a reasonable time.

Static shots of most of the competitors boats

Dave Marles takes the win with a maximum in round 1 and 2 starts. Not a good day for Keith and Martin with no finishes. Dave leads the 2022 Drivers Championship on 450

Long time absentee Steve Clements has kept his form, finishes every round and just pips Martin Fields’ 2 maximums and a start. Del Owen takes 3rd with a consistent 3 finishes. No so good for Tony Jarvis today with just one start in the final round. Derek still leads the Championship by 475 points as Steve missed round 1

Derek Owen took a comfortable win with 2 maximums. Tony Jarvis managed just one start and Dave Marles didn’t get off the bank due to engine troubles. Del leads the 15h Championship

It was great to see MPBA Chairmain Mick Fields out and about again. Mick drives his offshore like a multi – buoy to buoy so there’s no chance of overtaking him on the inside. Mick took a comfortable win with a total of 69 laps. Another long-time-no-see competitor, Thomas took 2nd place with 44. Dean had suffered all day with water ingress and could only manage 3 laps in the final round. Mick jumps to the top of the O3.5 Championship.

Les and Mick enjoyed a good battle in the 7.5O class. Les emerges victorious by 9 laps. Les sits atop the O7.5 Championship with maximum points from 2 races.

Dave Marles won this class after battling through some demolition derby style heats. Here’s a couple of crash sequences from the many. Jonathan Wilkins showed everyone how to drive with his electric powered boat and giant cells. James Taylor still leads the O35 Championship by 9 points despite todays engine troubles.

Adrian Marshall just pipped Les Wall for the win scoring 1,100 to Les’ 1,000. The Sport 60 Championship will likely be contested by these 2 with nothing really separating them in terms of speed.

A great day out, lovely weather, some spectacular crashes captured, some new faces and the return of some old ones. Looking forward to the 2 day Masters / Nationals on the 11/12 June.