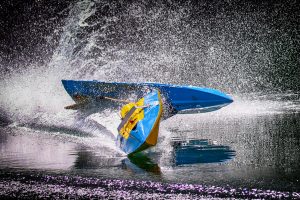 Round 5 of the MPBA 2022 Endurance Championship is the British Masters / Circuit Nationals event held at Elmbridge. It was decided that the Multis would run on Saturday and Circuit on Sunday rather than the usual half day for each on Saturday and Sunday. This makes it easier in terms of not having to change the course layout and makes it more economical for the competitors travel / camping wise. On the downside, it could mean that those who only ran in one discipline would only attend on one day thereby detracting from the social side which was always a major factor at this event. This report is for the Multi event on Saturday.
Good weather all weekend and a bit of chop on the lake for a change.

Originally we had 13 entrants, but with a late withdrawal and a simply rude no-show, we combined the split into a single 11 boat race. This didn’t make a lot of difference as the usual mechanical unreliability or bad driving soon whittled this down into fairly pedestrian rounds. Very unusual not to see Zack on the podium but experimenting with new settings today meant no full runs.
Dave Hole took the overall win by 1 lap from Ian Pickersgill with Grahame Morgan completing the podium. Good to see another driver getting some consistency in finishing.
Dave extends his lead in the 3.5 Drivers Championship with Iain 12 points adrift in 2nd. These 2 are now more than a whole race win in front of 3rd placed Robert Daniel
Thomas made his first Multi start of the year and edged Jackson for top junior but having missed 4 races is still way behind in the Junior Championship 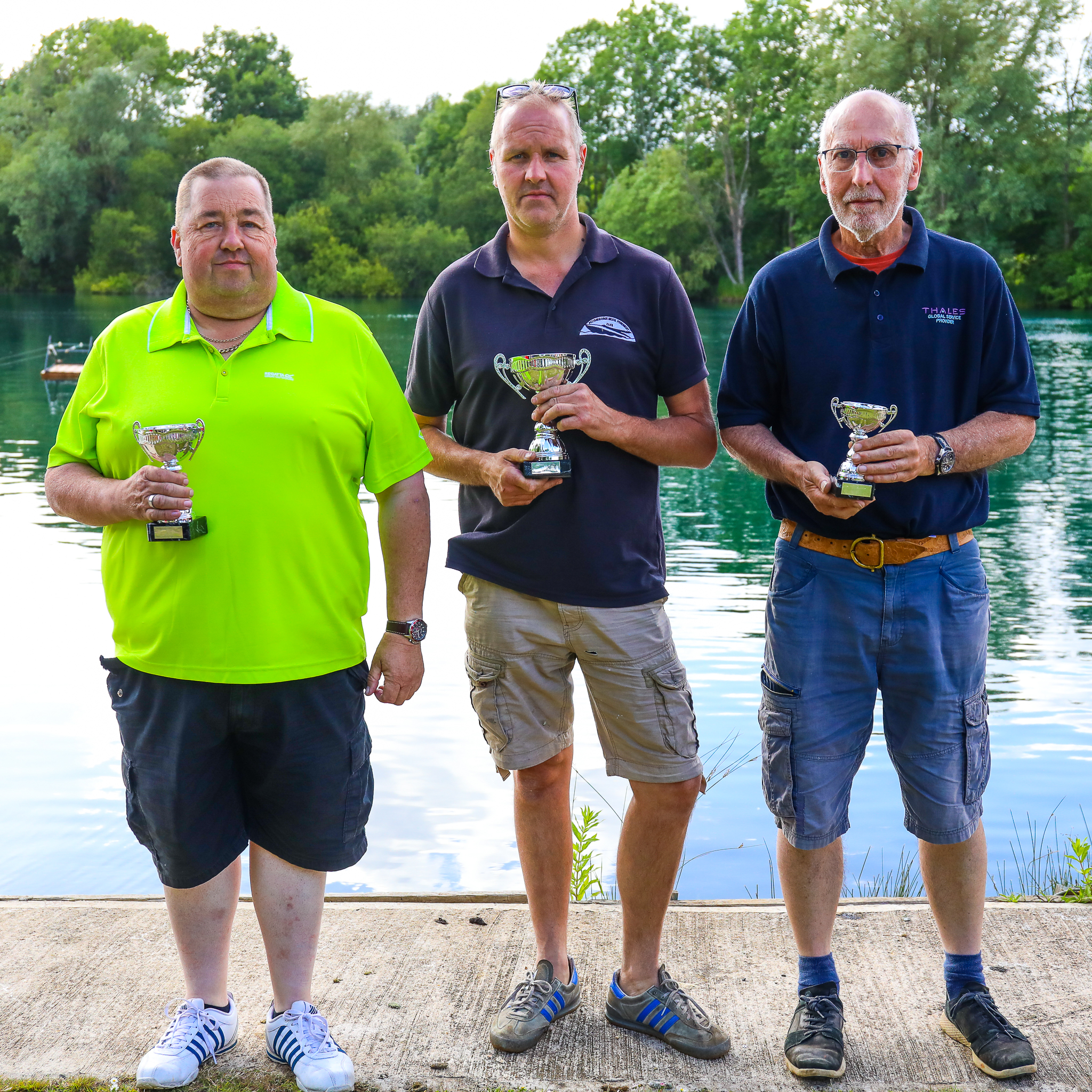 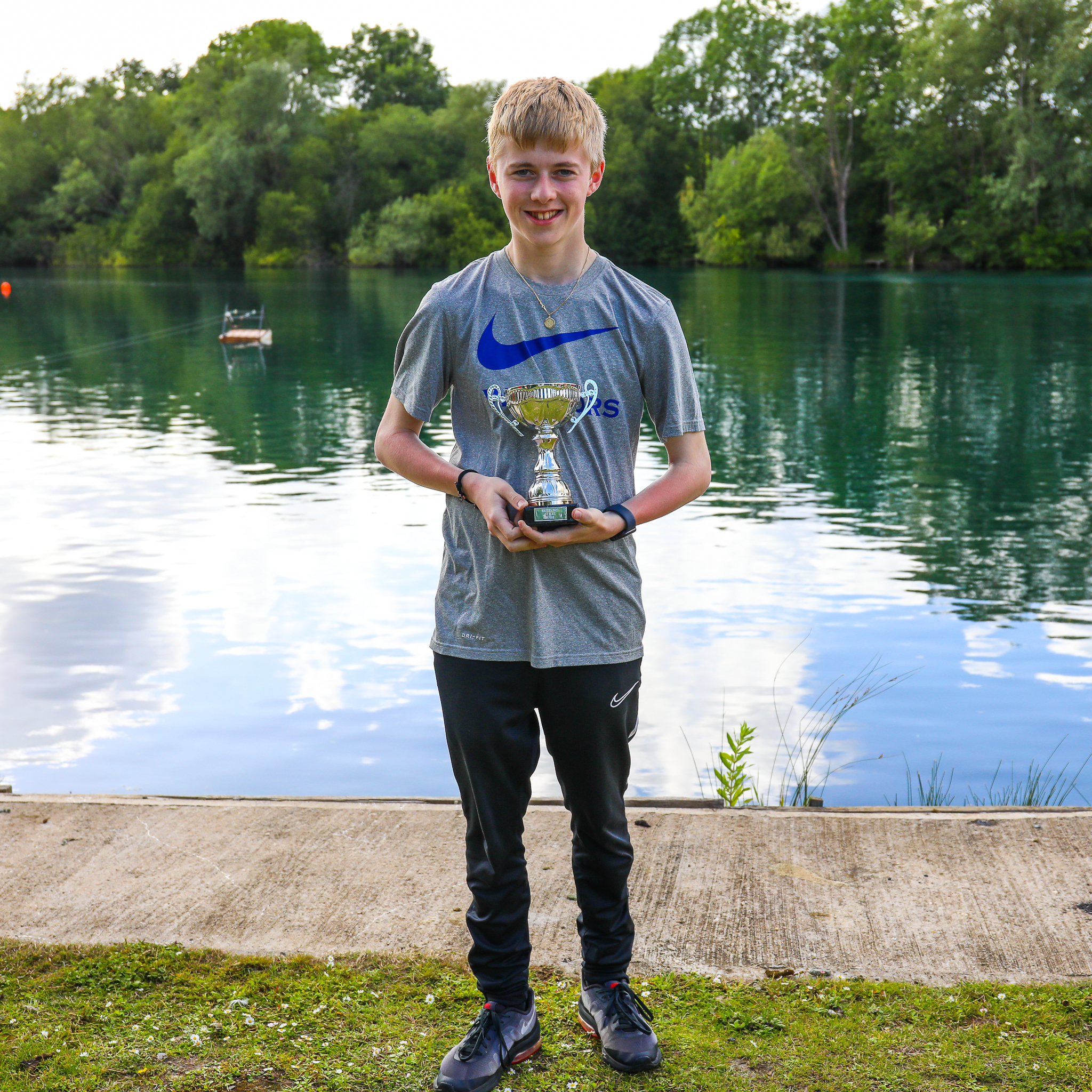 A 6 boat entry, but again marred by unreliability with only 3 of the drivers scoring more than single figures.
Mick Szebeko took the overall win from Steve Clements and Dave Humphries. Dave H was unable to recapture the speed and reliability he showed last weekend in Therdonne, France where he placed 5th in the 7.5 A final alongside some top class competition.
Andrew Aykroyd takes the lead in the 7.5 Drivers Championship, leapfrogging Robert Daniel. 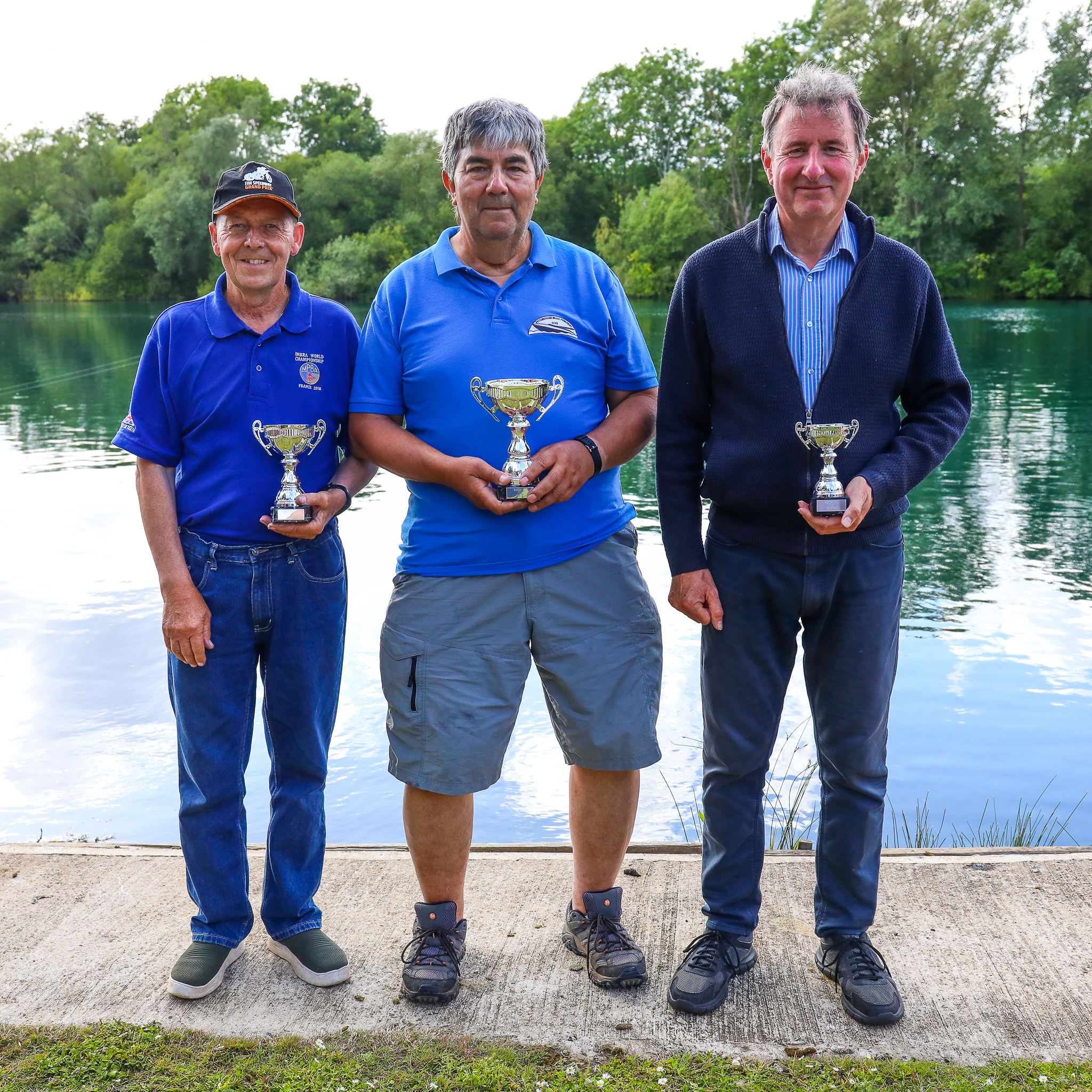 Some decent racing in the 15cc class, with good battles between James, Mike and Terry. Vlad found some extra performance in his boat and can expect to compete for more podiums with a further few minor adjustments to both the boat and strategy!
James extends his lead in the 15 Drivers Championship. Terry gains ground (water) on Vlad 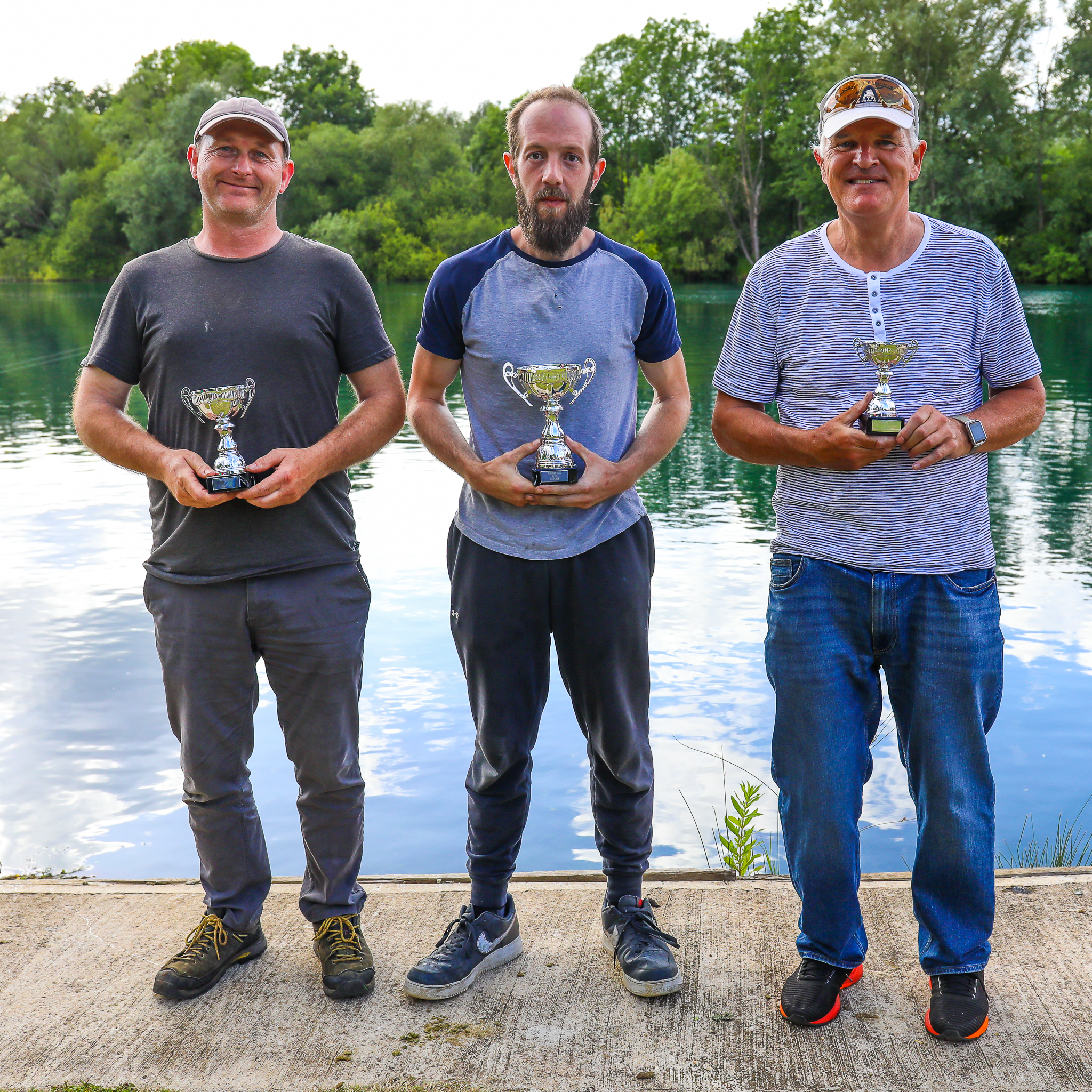 Best racing of the day saw James Taylor take the overall win from Dave Marles and Mick Pain.
Andrew Aykroyd retains his lead in the 27 Drivers Championship. Despite only a 4th place today, the new T8 ran very well for its 1st outing and Andrew has now been able to sell the 7.4 knowing he has a great replacement.
On a personal note, this crash between Dave Pillman and Dave Marles is one of the best action sequences I’ve ever captured. The 6th photo, and the one featured at the top of this page is as good as any professional could achieve 😉 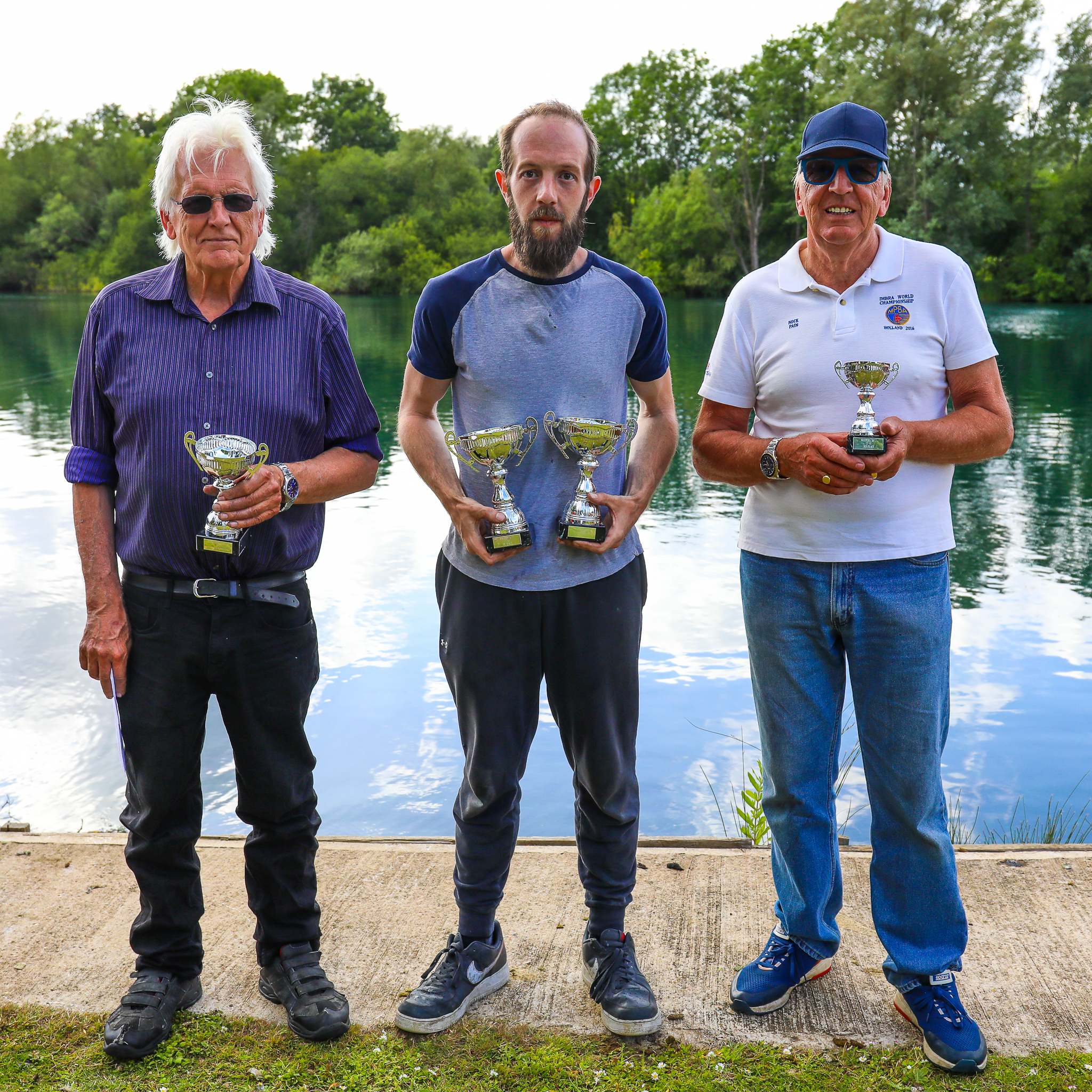 Sorry for the short report, not enough time with work commitments.
I’m still in 2 minds whether the Saturday Multi / Sunday Circuit is a better format, but I was going to both days regardless as it’s not too far for me to travel.
Endurance (Multi) racing in the UK continues to be plagued by mechanical failures or poor driving. The default tendency to use the right-stick to swerve instead of the left (throttle) by several competitors causes crashes and DNFs. All the time. Whilst that might be good for me as a photographer, it does little for the quality of competition when 3 boats out of 11 are left running after the first 5 minutes. To parrot an old cliche – To Finish first, first you have to finish.