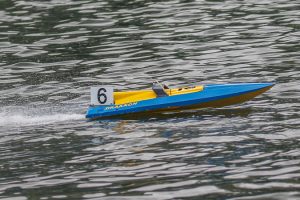 Thanks to a flurry of late entries, round 7 of the 2019 MPBA Multi National Drivers Championship was reasonably well attended and produced some great racing, especially in the 7.5cc class.
The weather was warm and for the most part cloudy. When the sun is low later in the year, it causes a lot of problems with visibility down the left hand side of the course, but no excuses today. Other than a bit of weed on the lake, conditions were perfect for racing.

3.5cc
Not the best day for the usual suspects in 3.5cc. Erstwhile Championship leader Keith Burgess was away on holiday, and 2018 3.5cc Drivers Champion Dave Hole leapfrogs Keith and tops the 3.5cc Drivers Championship with 2 races to go. Thanks Dave for pointing out my error in the points allocated!
But congratulations to stalwart Grahame Morgan, a 3-time 3.5cc National Drivers Champion, who returned to the top step of the podium after what seems like a long wait! Colin Croxford has a lot of speed (And revs!) with his Nova Mephisto and grabbed 2nd place
Recent double International podium placer Phill Fields was minding his own business running an engine in when someone ran over the top of him, putting a hole in his radio bay which pretty much ended his day.
The top 6 places were all separated by 1 lap respectively – A better rate of full-runs than we usually get. It makes sense to have a full race rather than split, the racing is better and we’ll only do this when it’s really necessary in future. Our thanks to Tony Ball, who flew in from Portugal to support his Club’s race. Best Lap – Colin Croxford – 17.674 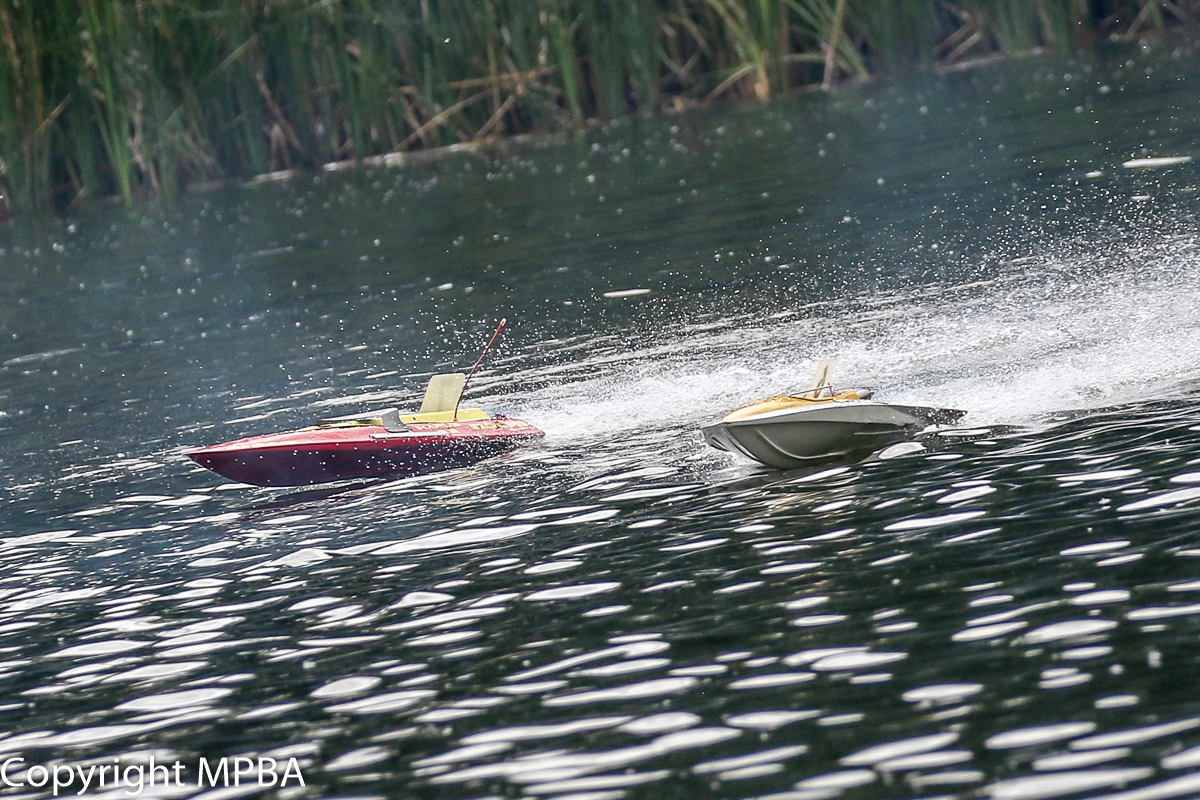 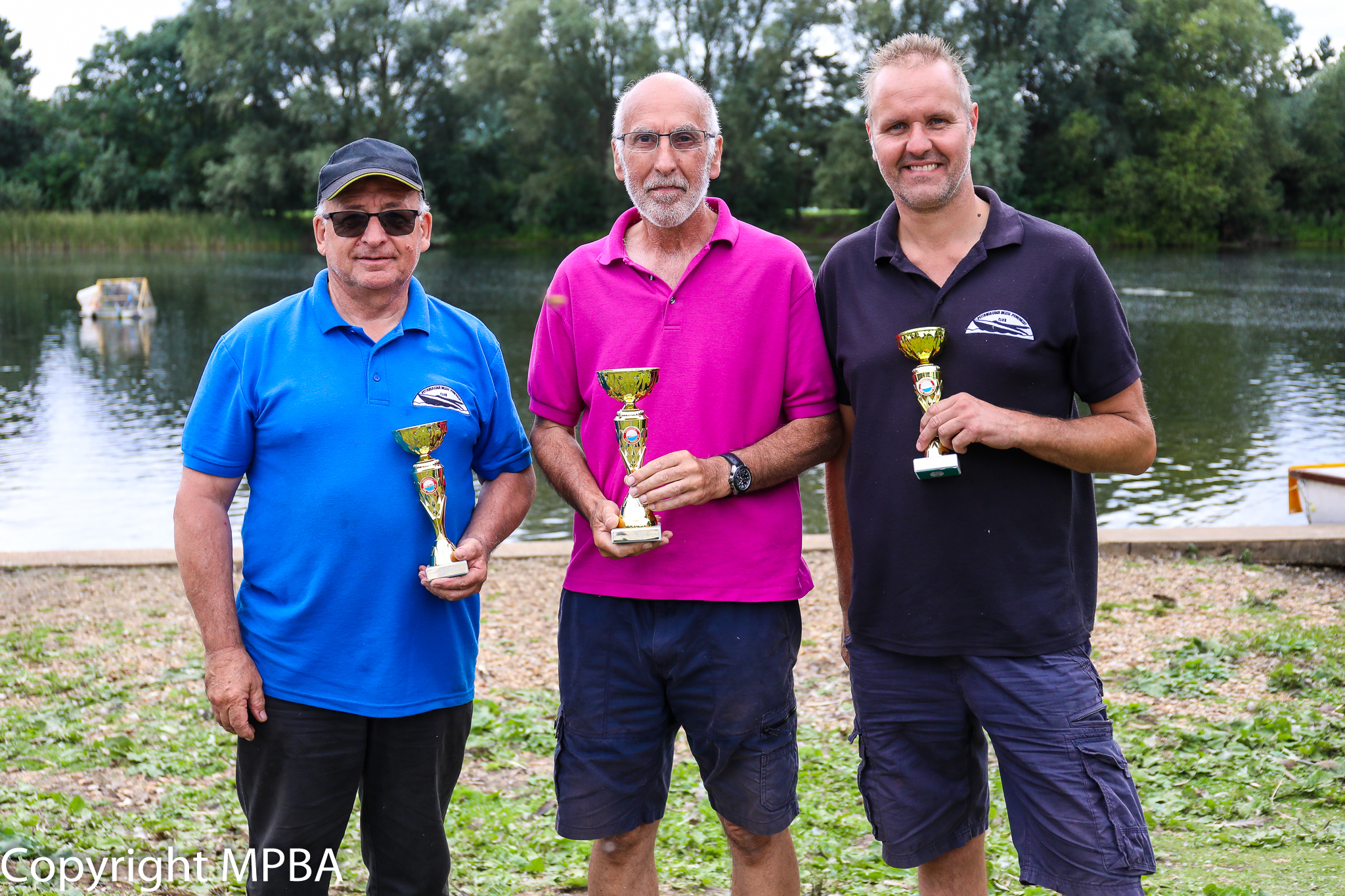 7.5cc
I can’t recall seeing this in recent years – The top 5 all finishing within 2 laps. The racing in the UK is often characterised by attrition and ‘racing incidents’, the latter no doubt a consequence of the small-ish lakes we have to run on over here. But today we saw some of the best racing of the year. More of this please! Andrew Aykyoyd tells it like this “I put on a masterclass show of driving in the 7.5 with amazing overtaking manoeuvres”. Do any of the rest of you remember this? Please reply in the comments section.
Dave Marles brought his latest 7.5cc design called “Drakkon” to the race. This boat was so new, the paint was still wet! It looks like the must-have 7.5 boat for 2020, being fast and stable and a step up from the Pegasus Evo. Dave might have had the win today were it not for a fuelling miscalculation causing him to stop with over 40 seconds remaining. At an average lap time of 15 seconds, this would have given him close to 3 extra laps and may have topped Drew. Not bad for the first time on the water!
The race for the GB Team qualifying spot is hotting up, with Julian Waumsley moving ominously close to Robert Daniel after today. An unfortunate coming together of these 2 protagonists allowed Julian to close on Robert by 13 points. Julian admitted it was his fault, and with no judgement given on time-penalties or even disqualification, Julian took 2nd place and 35 points. With 80 available in the last 2 races, Julian could theoretically finish on 190 points with 2 wins and Robert a max theoretical 185. Don’t count out Dave Pillman (Well maybe count him out) or Andrew Aykroyd though. Dave and Andrew have said they are not going to Italy, but a couple of wins for either of them will give them 200+ points and force Robert and Julian to eliminate. Best Lap – Drew – 14.687 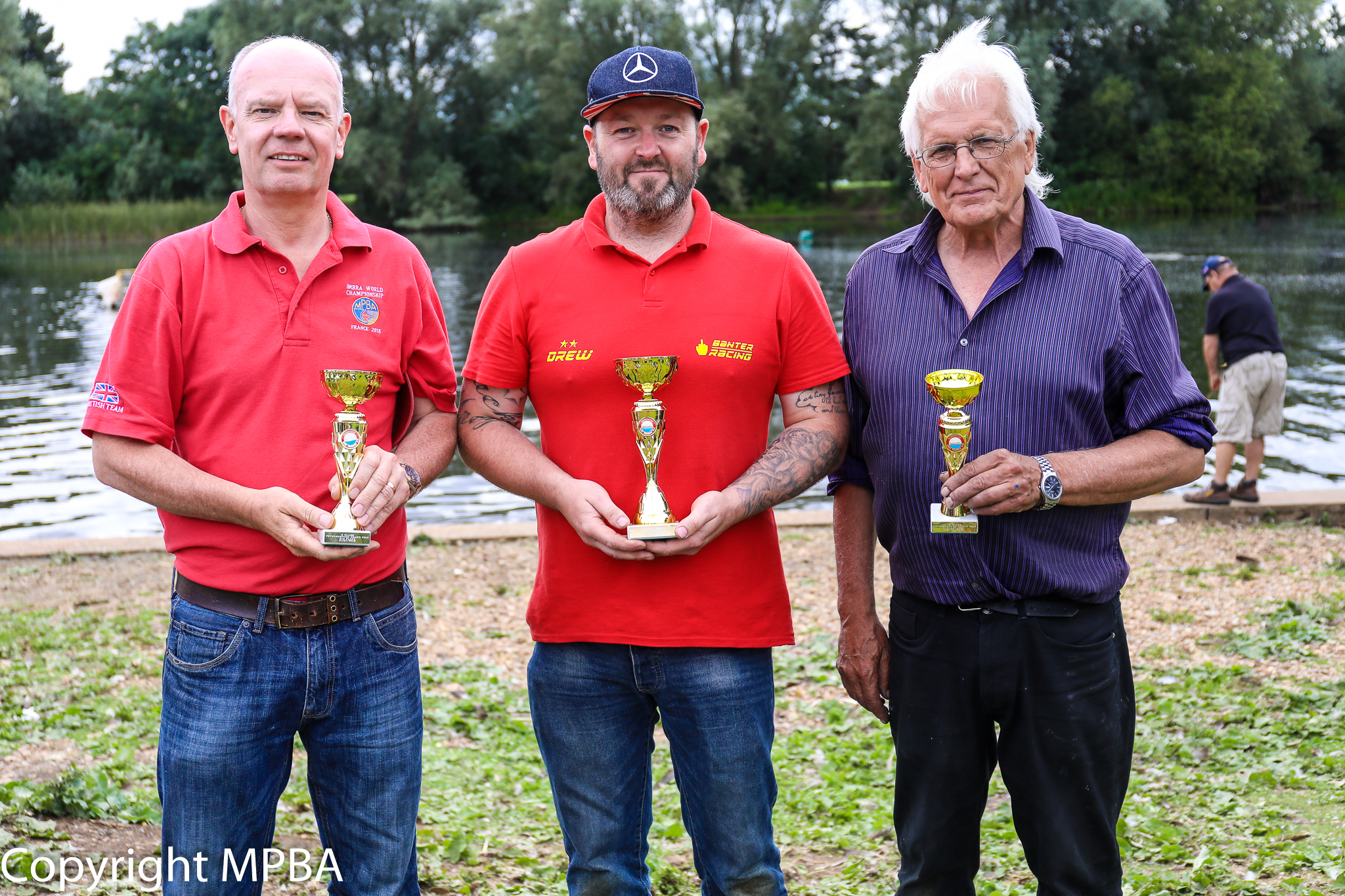 15cc
A tale of 2 Mikes. One last minute drop-out still left us with a reasonable 7 boat race, at least in the first round. Damage or electing not to race meant the 2nd round was contested by just 4 boats. In the end Mikey Hillstead just edged it by 1 lap from Mike Lawson, with Sam Lincoln taking 3rd. It’s great fun to watch Mikey’s Potenza – It’s right on the edge and he drives it super-aggressively. Ross doesn’t hold much back either and we could have done with Mark Wraight and James Taylor to spice it up even further. Both Mark and James’ boats are currently down for maintenance. Best Lap – Mikey – 14.528 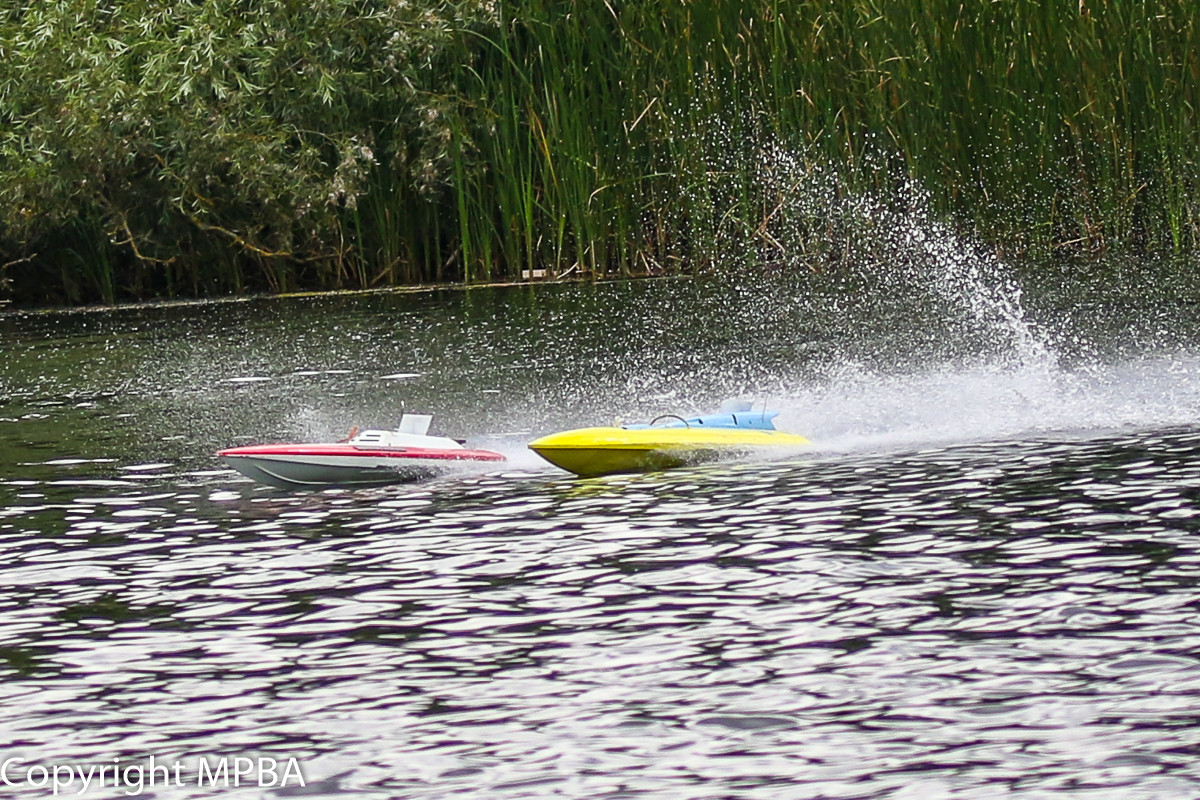 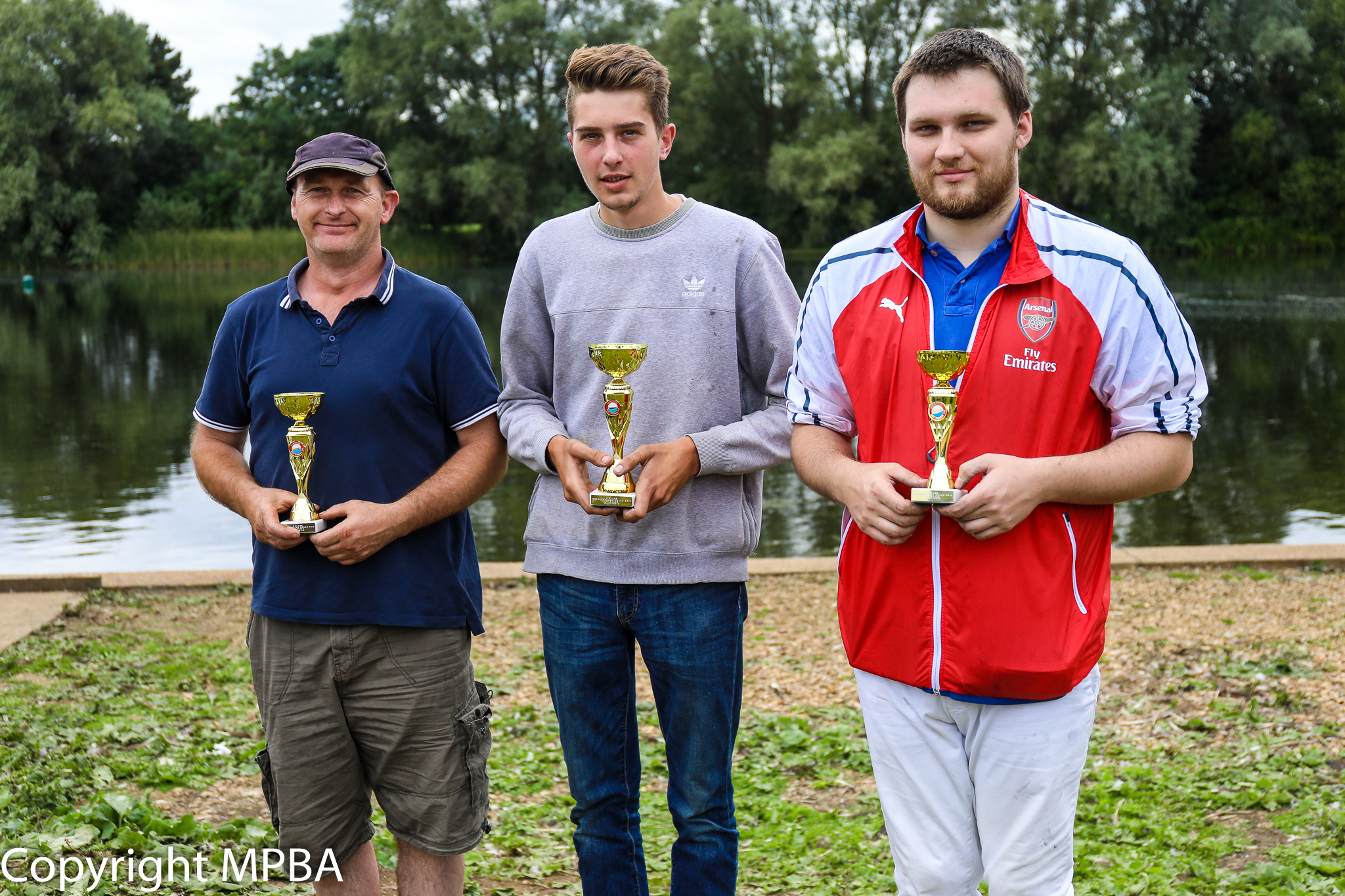 27cc
Well would you believe it, after an absence of a few years, Steve Whenham storms to a win with his brand new Torando 7.4 / Tiger King combination. It looked a completely different boat to its first outing at Elmbridge 2 weeks ago. Fast and stable. Mick Pain was hot on Steve’s heels in 2nd, but characteristically backed out of any potential crash situations and ended up 3 laps down.
James Taylor was trying out a new carburettor and not having much luck, so he switched to the old one for the second round but was still having issues. James thinks he may have bent a rod and the squish had changed. His 4 wins so far make him untouchable and assured of the GB Team spot. Best lap and fastest of the day – Dave Marles 14.127 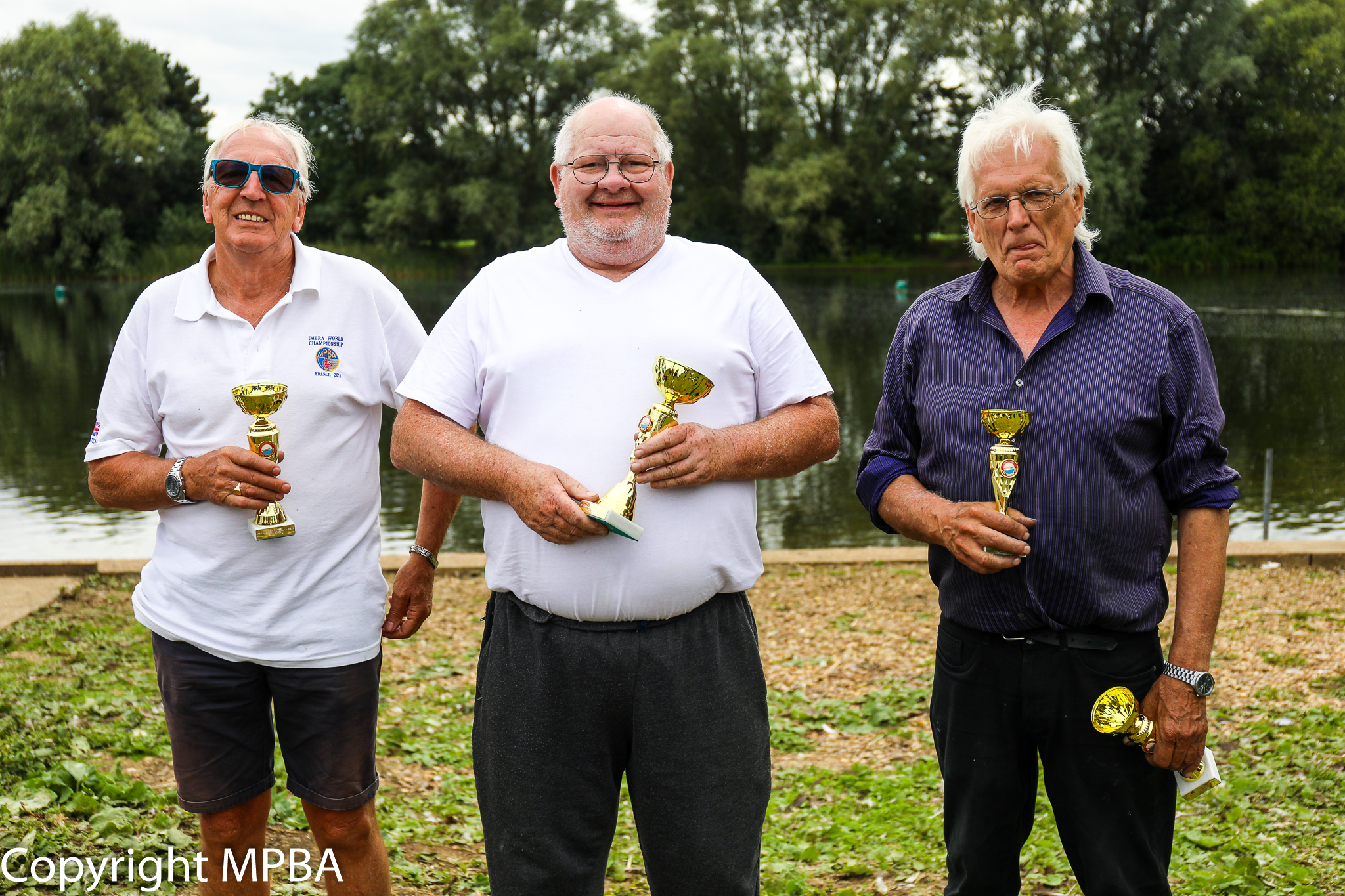