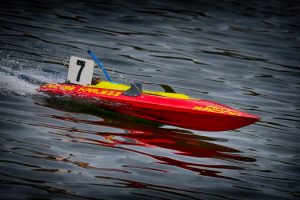 Round 2 of the MPBA 2022 Endurance Championship was held at Colwick Park, Nottingham, our second time here. 16 racers with 21 boats was a smaller than average field, which was unfortunately affected by some late-in-the-day positive Covid tests.
A cold but bright day and a calm lake meant we could enjoy decent racing conditions, although the lapcounting tent did it’s best to imitate a kite towards the end of the 2nd 15cc heat so we had to dismantle it and run race control in the open. Thankfully there was no rain to threaten the laptop and decoder!

A decent 7 boat entry, but unreliability again was the key contributing factor. Endurance races are only 20 minutes long and with a large lake with big run-off areas, there really isn’t much excuse for not being able to finish a race. But it happens all the time. Perhaps rather than relentlessly pursuing those extra few km/h, racers would be better off concentrating on doing a full 20 mins. With this strategy, you would get a podium every time! (Well in the UK anyway).

Overall 3.5cc winner Robert Daniel put in a full run and 57 laps with his new Ikarus 3. The boat is looking really fast and stable and could be finals material in Poland. Dave Hole’s 35 points keeps him in the lead of the drivers championship, 13 points clear of Robert.

But the star of the show today was 11 year-old Jackson Aykroyd, winning his 1st race beating all the seniors in round 2 with a full run and some excellent buoy to buoy driving. Several of the seniors commented that you wouldn’t know he was a junior judging by his driving under pressure. Bravo. 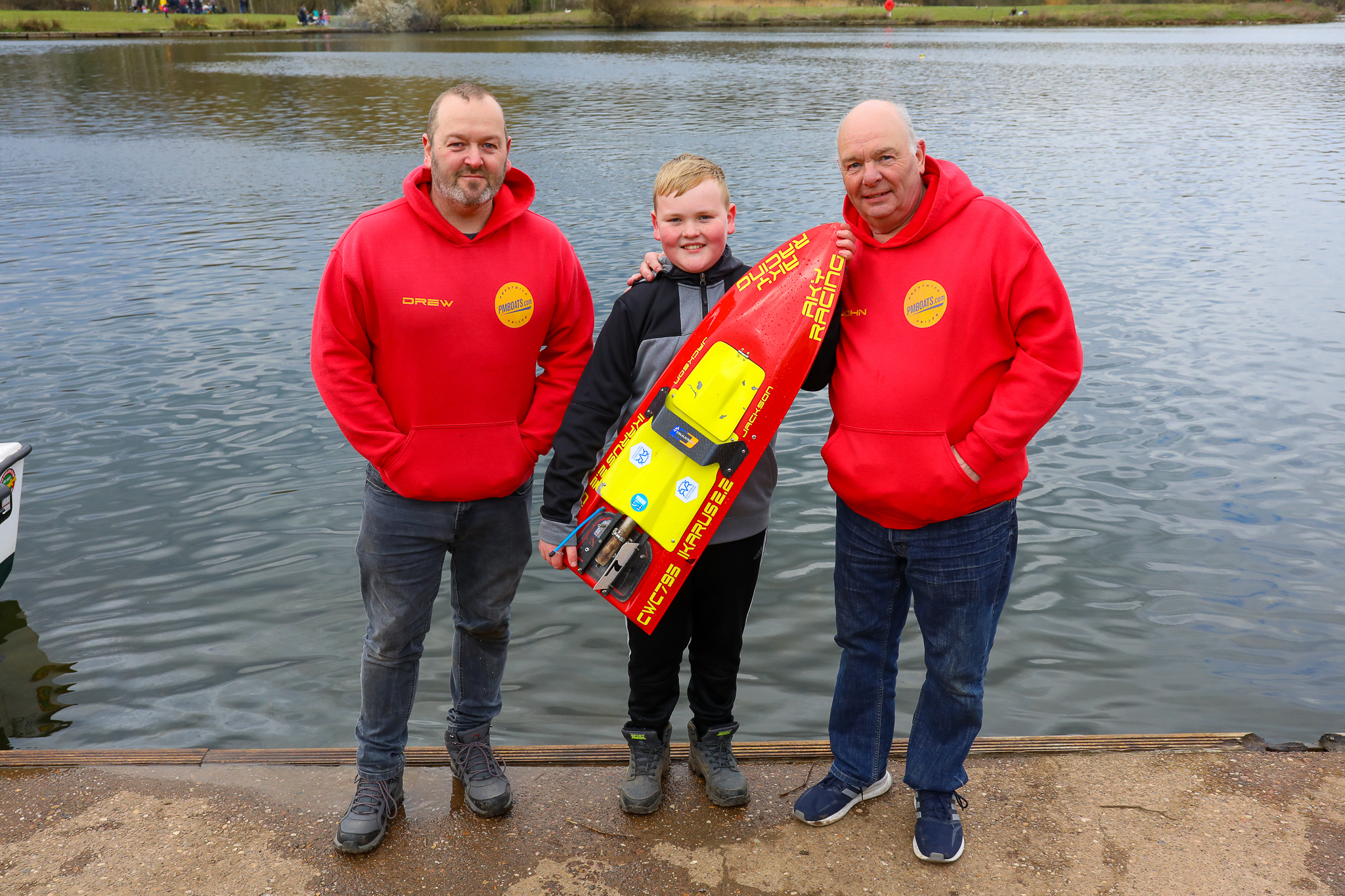 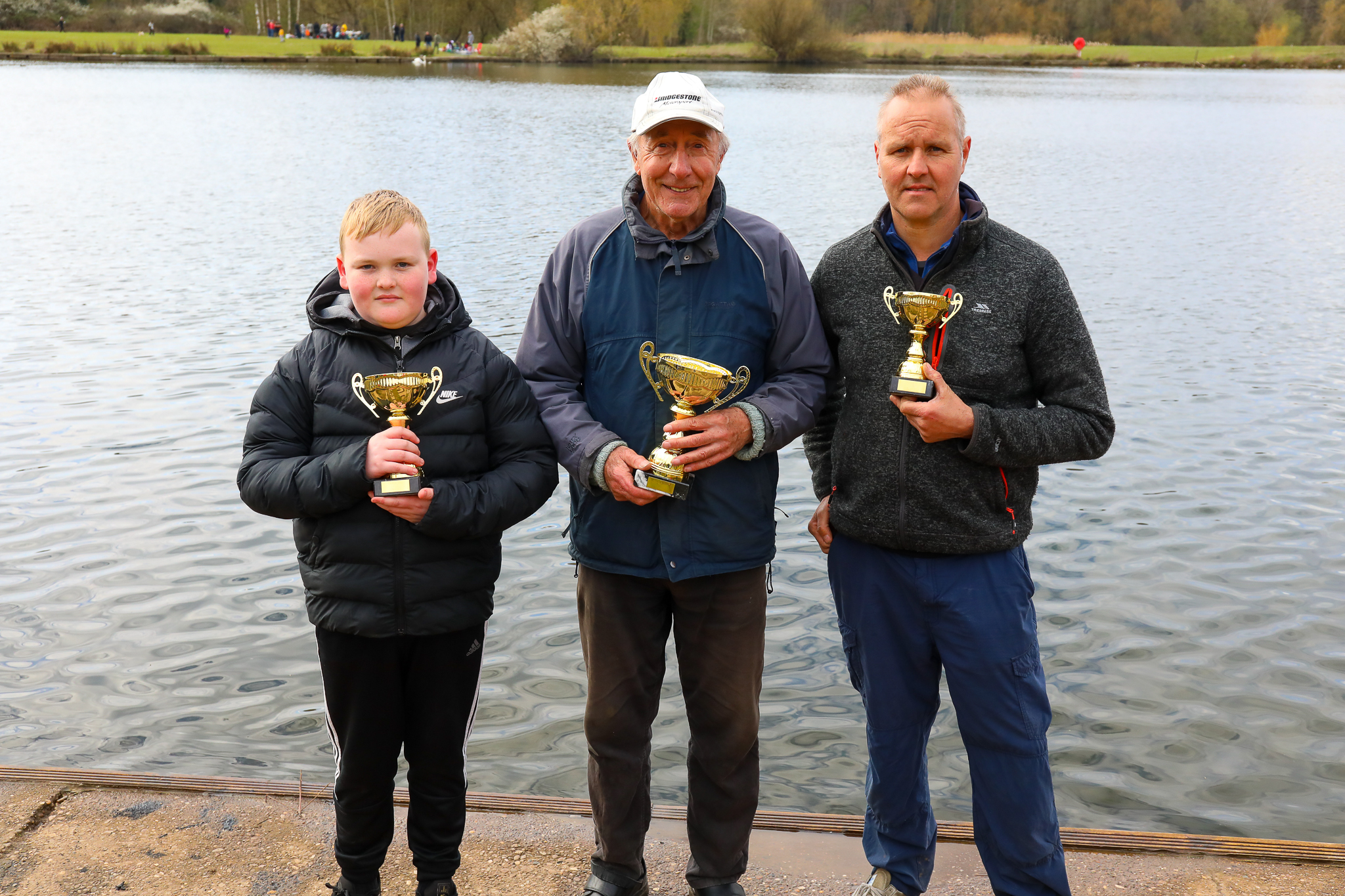 Unfortunately the 7.5cc class was poorly subscribed this week with only 3 competitors, none of whom managed a full run. Unusually though, 1st and 2nd ended up with the same 32 laps, separated only by seconds. Robert Daniel narrowly took the overall win from Andrew Aykroyd. Both were running Prestwich Drakkons. A 2nd in Peterborough and a win today jumps Robert into the lead of the NDC with Andrew 2nd 13 points behind. 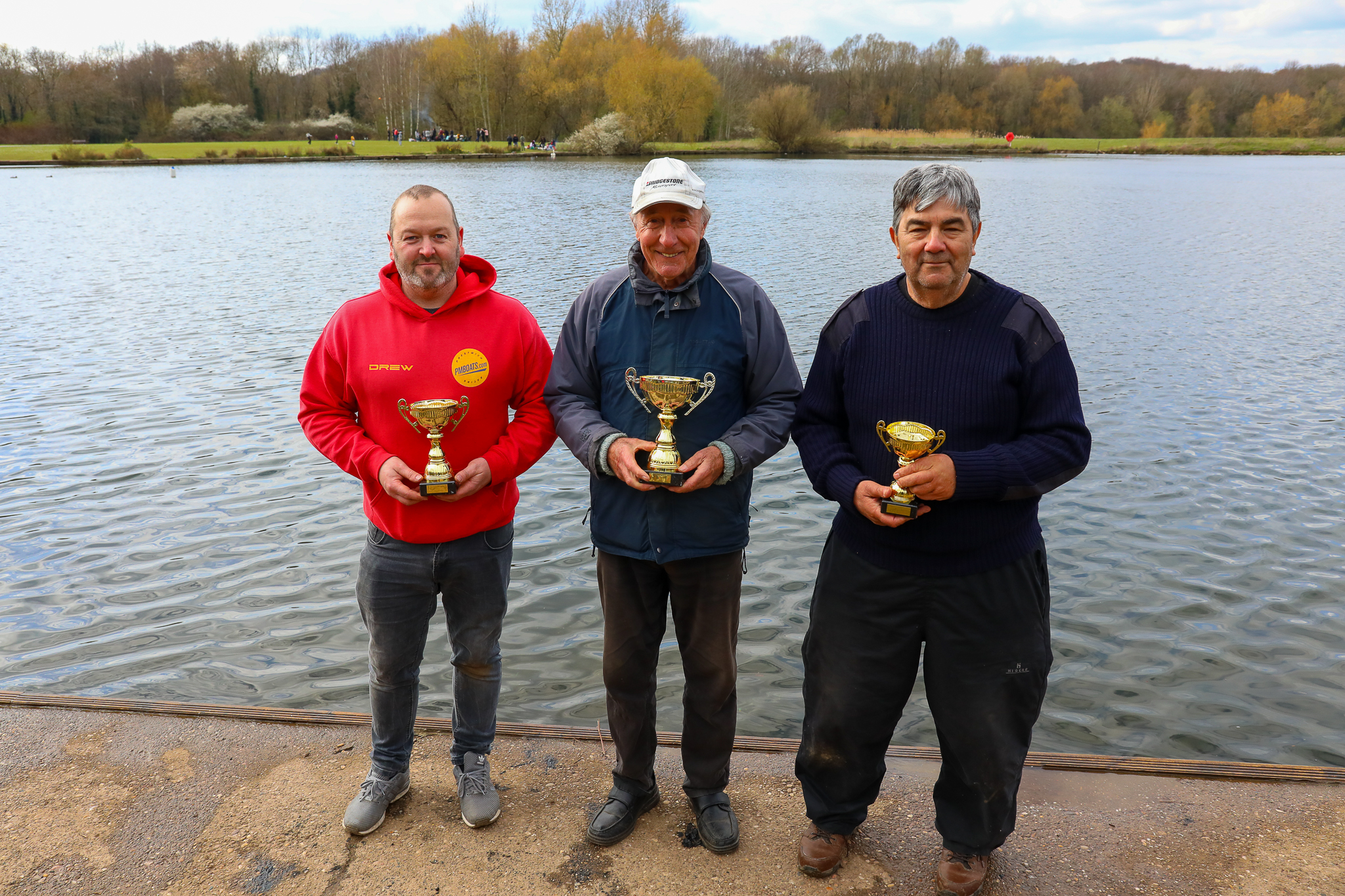 As the only one with a full run, Terry Holmes took a comfortable win from Vlad Getov in 2nd. Good to see Vlad on the podium and enjoying his racing after falling victim to a despicable theft at Peterborough last month. The win puts Terry joint top of the NDC with Nigel on 62 points.
A radio issue saw Nigel Smith aground 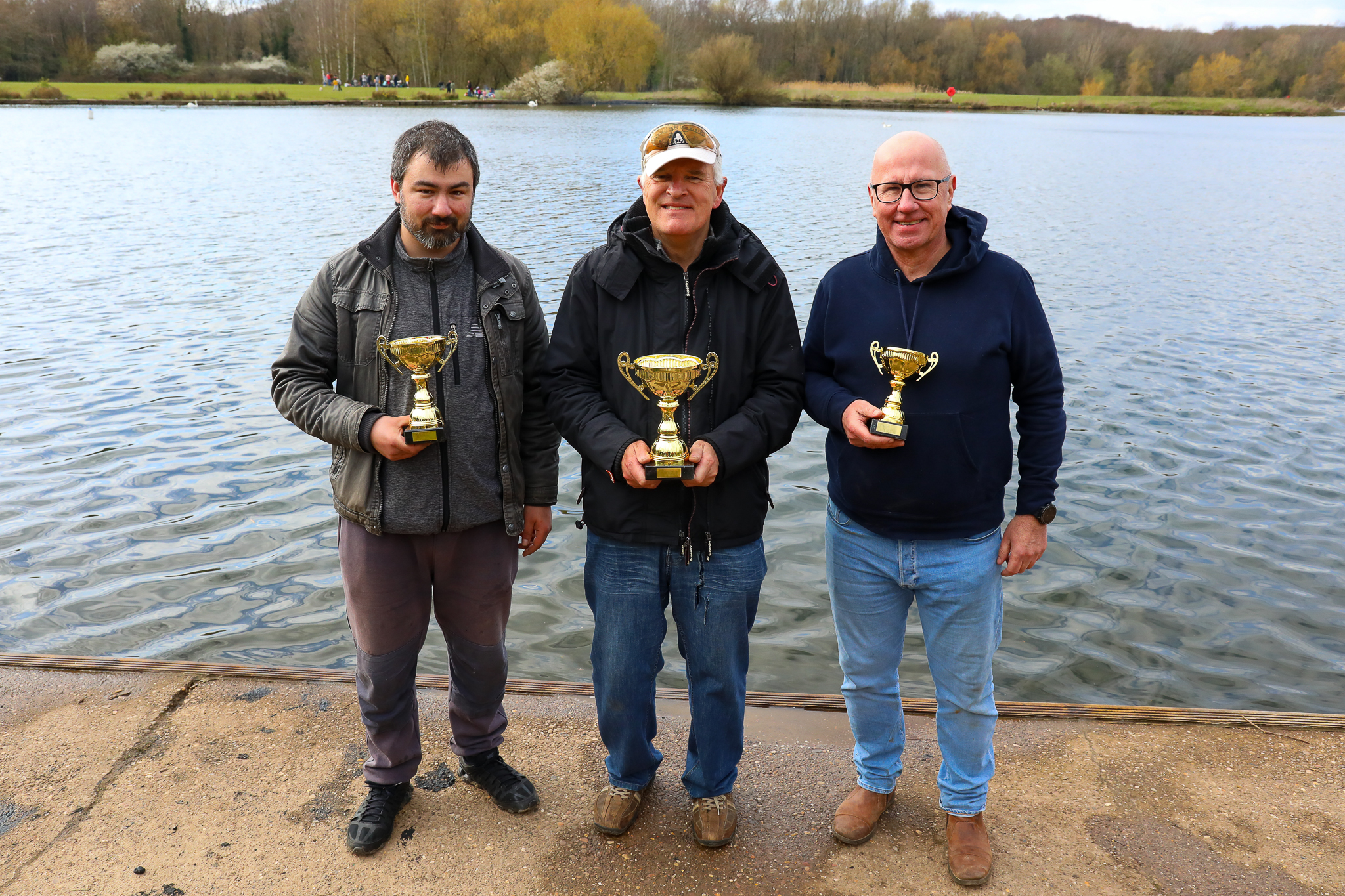 The best racing of the day saw everyones laps in the 60s. With Andrew Aykroyd edging 1.5 laps clear at the end, we we treated to a real cat and mouse battle between Mick Pain and Terry Holmes for 2nd place. Mick has found some real pace this year with his 27. Mick and Terry swapped places 3 times in an absorbing race-long battle. If only every race were like this! With no NDC points awarded at Peterborough due to the noise issues, Andrew’s win puts him top with 40 points. 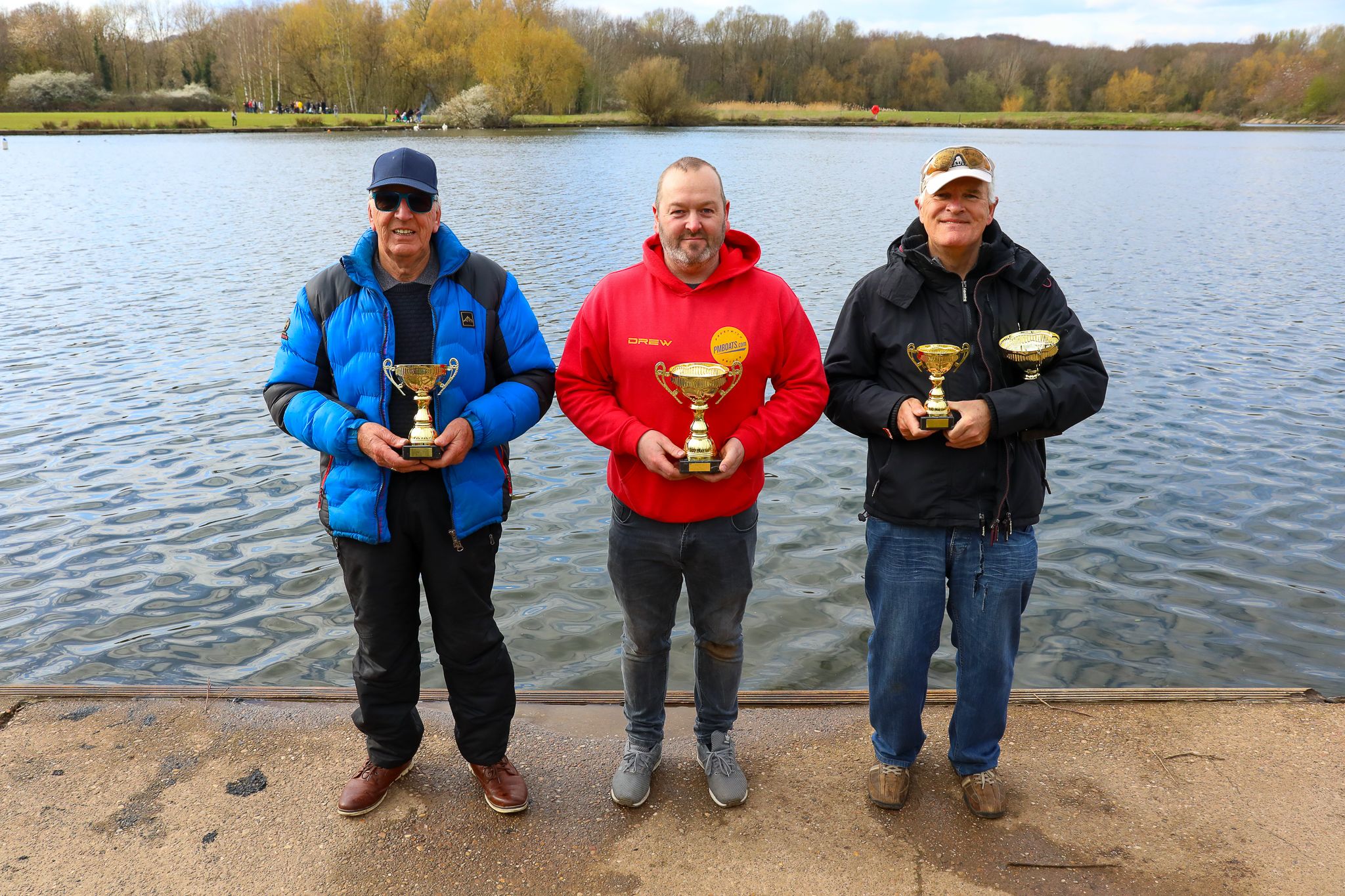 A big thank you to the Nottingham club for providing the venue and extremely reasonably priced refreshments. Proceeds from the refreshments went to Blood Bikers

With Stuttgart cancelled due to weather warnings, Nigel Smith made the last-minute trip up to Colwick. Would have been nice to see a few others do the same. New lakes don’t come along too often.

Unsung hero of the day – James Taylor who despite just about recovering from Covid in time, made the 170 mile 7 hour round trip to bring the transponder gear, himself and Vlad to the event. Basically, we could not have run the event without James’ selfless support. We can therefore forgive him for the very rare occurrence of him not dominating the 15cc and 27cc classes!

Last but not least Jackson Aykroyd – When you’re this good at 11, we don’t really need to run a separate junior championship. I’ve added a separate Combined NDC table and he’s currently 3rd! Dad’s work commitments unfortunately mean he won’t be able to make Poland 2022 but hopefully we’ll see him part of the GB Team in future.