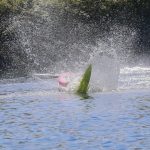 A beautiful sunny day greeted the racers for round 3 of the National Drivers Championship at Brentwood on Sunday. There was some concern with the organisers as this was the first test of the new online booking in form together with preparation of the lap counting program by someone completely new. In the end these concerns were unfounded as both the booking in process and lap counting was flawless and many said it was an improvement, with a live entry list and a feature-rich heat detail page on the new MPBA Race Hub. Thanks to MPBA General Secretary Linda Buonaiuto and MPBA Webmaster Andy Coburn for making this happen. Entry numbers were good and the 15cc and 27cc classes in particular promised some exciting racing with full heats.

3.5cc – Richard Sewell arrived armed with a brand new Ikarus 2.3 along with a #dptuned O.S. engine. There was no doubt his boat was quick, but the happiest people will be the polystyrene manufacturers whose profits will soar from all the replacement buoy material that will needed after several incidents. Here’s one of the more spectacular efforts: [Click to enlarge]

Julian Waumsley took the win after Andrew Aykroyd mistakenly elected to sit out round 2 thinking he’d done enough laps. To compound his misery, he was beaten into 3rd place by Dave Hole, who moves to within 4 points of championship leader Dave Clay.
Listen to what Julian Waumsley had to say before the race : Click Here

7.5cc – Dave Pillmans Pegasus Evo is the boat to beat this year in Martin Fields’ absence. If only Dave could have kept it upright he surely would have retained and extended his championship lead. However, he now trails Andrew Aykroyd by a single point after Andrew grabbed 3rd spot on the day and top spot in the championship. Andrew beat Dave by 9 seconds with an engine he borrowed from him for the 2nd round! Oh the irony! Dave Clay won the class with MPBA Chairman Mick Fields taking 2nd place. Dave Clay and Mick now sit 3rd and 4th in the 7.5cc championship.

15cc – With 9 boats including a newbie in one heat (Brentwood is not the biggest of lakes) this promised a drama-filled race. As it turned out, the racers were well aware of this and for the most part kept their cool to produce some great racing. Championship leader James Taylor had some trouble in testing on the Saturday when he managed to strip a metal gear in his T7. Some hasty repairs and switch to a nylon gear and James was ready to race. Mark Wraight had repaired his new Seljak boat and needed to get things right before the Haarlem International. Things were not looking that great for Mark in the first round but he found the magic bullet during the lunch break and dominated round 2 for an emphatic first win with his new boat after Phill Fields elected to sit out round 2 having completed his setup for the upcoming International.

Here’s what Mark had to say about his half-time transformation : Click Here

Marks win lifted him to 4th place in the championship albeit 23 points adrift of leader Phill Fields who took 2nd on the day, and rather embarrassingly 5 points behind twin brother Gary Wraight although we doubt it will stay that way for long. Mike Holliday took 3rd place, 4 laps in front of Gary.

27cc – Another 9 boat race that produced the best racing of the day. An epic battle between James Taylor and Steve Baxter. Steve’s 27 boat is really quick and James narrowly lost out by 8 seconds after going down a prop size for round 2 to improve stability. Unfortunately the effect of this was to prevent the boat from lifting and achieving its top potential speed. Congratulations to Steve though, James is usually unbeatable in the 27cc class and was very optimistic before the race. 1st, 2nd and 3rd (Terry Holmes) were all within 1 lap.
Here’s what James had to say before the race (Additional commentary by Rok Folkson!) : Click Here

James’ 2nd place puts him top of the 27cc championship, 12 points clear of Mick Pain who had a radio issue and an unfortunate coming together with the rescue boat. See FSR Photos on Facebook