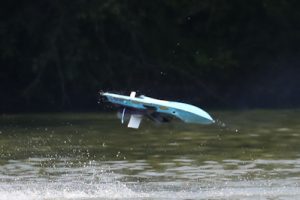 More Photos | R1 | R2 | R4 | Back to Race Hub
As we move into the mid-point of the racing season, the now traditional joint Multi and Circuit event took place at Elmbridge Model Boat Club at the weekend. With 76 boats entered – 39 Multi and 37 Circuit plus 2 course changes from M to Oval and back again and reconfiguring the lap counting system, there was a lot to get through over the 2 days.

What can we say? More of the same please! Great weather, intense competition and a superb atmosphere was served up for the racers and spectators alike at without doubt, the best event of the year so far. Once again, our thanks go to the guys at Elmbridge for hosting this event, and all the volunteers who worked tirelessly facilitating the running of the meeting and those who provided a constant supply of hot food and and cold drinks throughout the weekend.

Along with the some of the best trophies we have seen in recent years, results from this event would also count towards the 2018 National Drivers Championship, so there was a double-incentive for the racers to do well, with most of the top UK racers and team members for the 2018 iMBRA World Championships making an appearance.

Multi
Detailed Results
3.5cc
Split into 2 heats due to numbers, the 3.5cc class remains the most competitive in the UK. Other than mandated manual changes for driver/mechanic clashes, the heats are made up randomly by the lap counting software and produced a ‘Clash of the Titans’ in Heat 1 with current iMBRA European Champion Zack Humphries, current National Drivers Champion Mark Wraight, 5-time World Champion Dave Marles, recent International podium placing Andrew Aykroyd and Leon Morgan, plus super quick drivers Dave Pillman and Nigel Smith. Before we talk about the results, a special mention should go to Junior Thomas Clements who drove superbly in both rounds keeping his line, often right in the middle of the fast and furious Seniors. Well done Thomas!

Zack Humphries is currently one of, if not the best in the World in 3.5cc, having already sealed the 2018 iMBRA Western League 3.5cc title with 2 wins and a 2nd in the 3 Internationals so far this year. Zack put in an superb 60 lap score in round one which nobody expected to be beaten. Then along came Leon Morgan with his new Falcon in its first race. Leon defies all logic, doing very little racing, then turning up and putting in a top-drawer performance. Having crashed out in round 1, Leon drove super aggressively in round 2 and was easily the fastest on the water and looking good to top Zacks score when a servo failure put an end to his race. This was a great race to watch with Mark Wraight, Andrew Aykroyd, Dave Pillman and Dave Marles battling within inches of each other. Mark Wraight eventually came out on top, recording 56 laps, 4 behind Zack. 3rd place was taken by Dave Hole who ran in heat 2. Dave recovered from an accident in round 1 which put a hole in the Vee of his Falcon to score 54 laps, 2 behind Mark. (Dave is now known as Two-Holes). Daves 3rd place finish leapfrogs him above Dave Clay to lead the 3.5 Championship by 5 points. 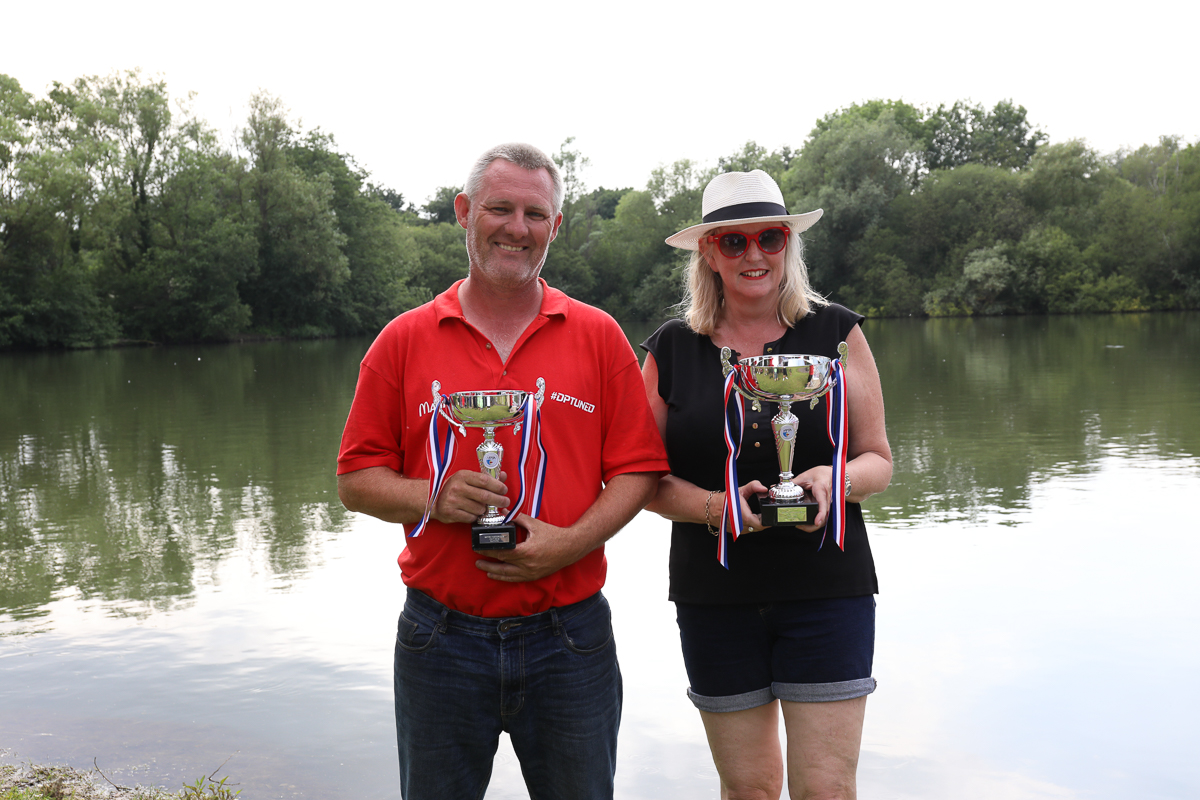 7.5cc
Dave Pillmans new Pegasus Evo is the boat to beat in the UK at the moment while Martin Fields is building his new 7.5. Dave needs to capitalise on this and grab his maiden National Drivers title. He won’t have a better chance than 2018. Some lively banter went on in the week leading up to this event with fellow #teambanter members running a poll that Dave would DNF. Dave was pleased to silence the naysayers by taking 1st place, fastest lap and top spot in the Drivers Championship by 27 points over previous leader Andrew Aykroyd.

Thumbs up from Dave Pillman 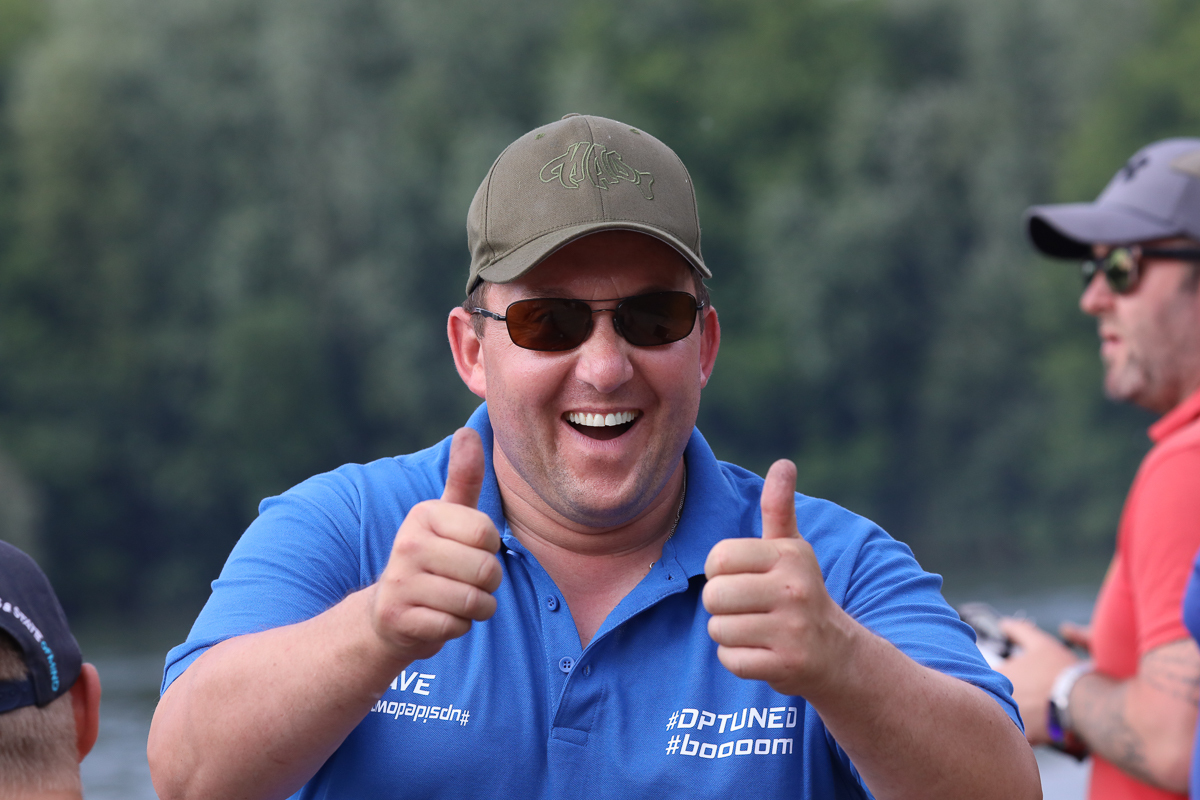 Geoff Parmenter grabbed 2nd, 2 laps behind Dave, with Steve Clements in 3rd, just 15 seconds behind Geoff, who followed up his spectacular acrobatics in Haarlem with this effort. 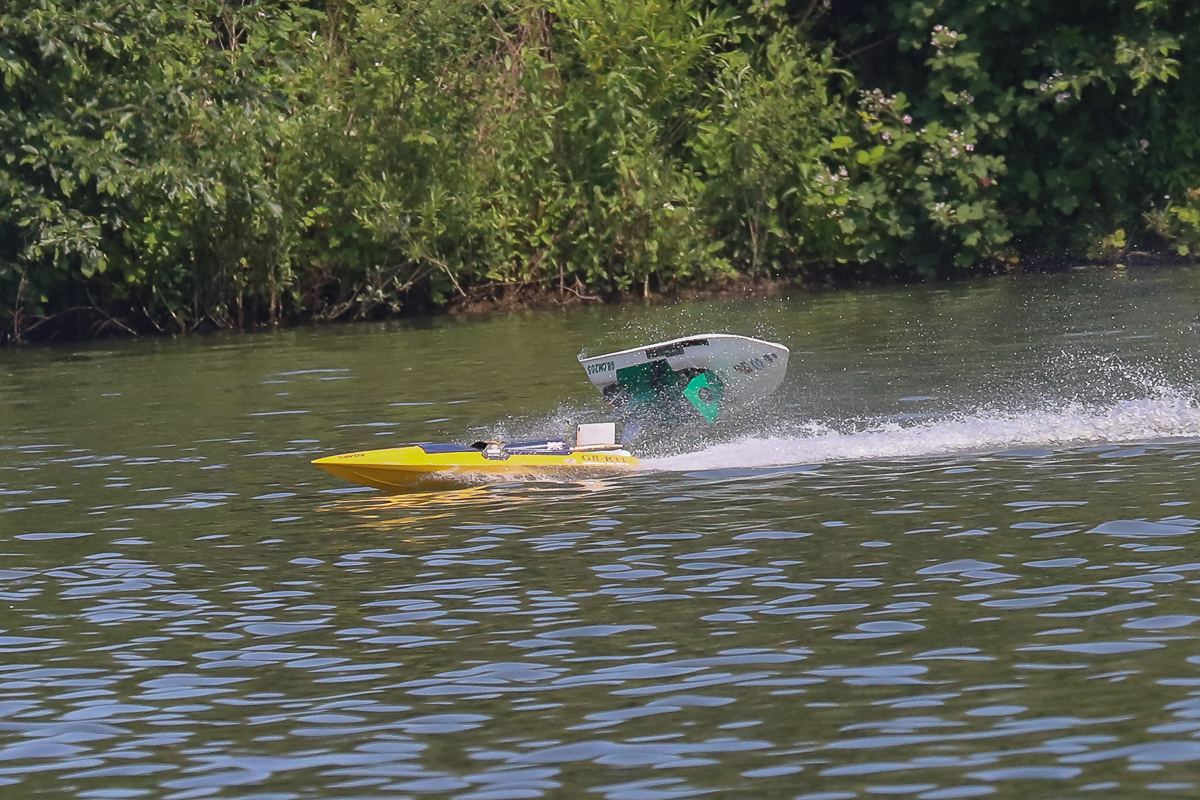 Dave Humphries runs a 4.5cc engine in a 3.5 boat in the 7.5cc class. Confused? Well this weekend, Dave and son Zack were using the same 3.5cc boat and they swapped out Zacks 3.5cc engine for Dave’s 4.5cc one and Dave proceeded to take 4th place in the 7.5cc. Dave has been using this combination for a while now and has been very close to International A finals with it. We think he’s fighting an uphill battle though and should get a 7.5cc boat and engine if he wants to win anything. 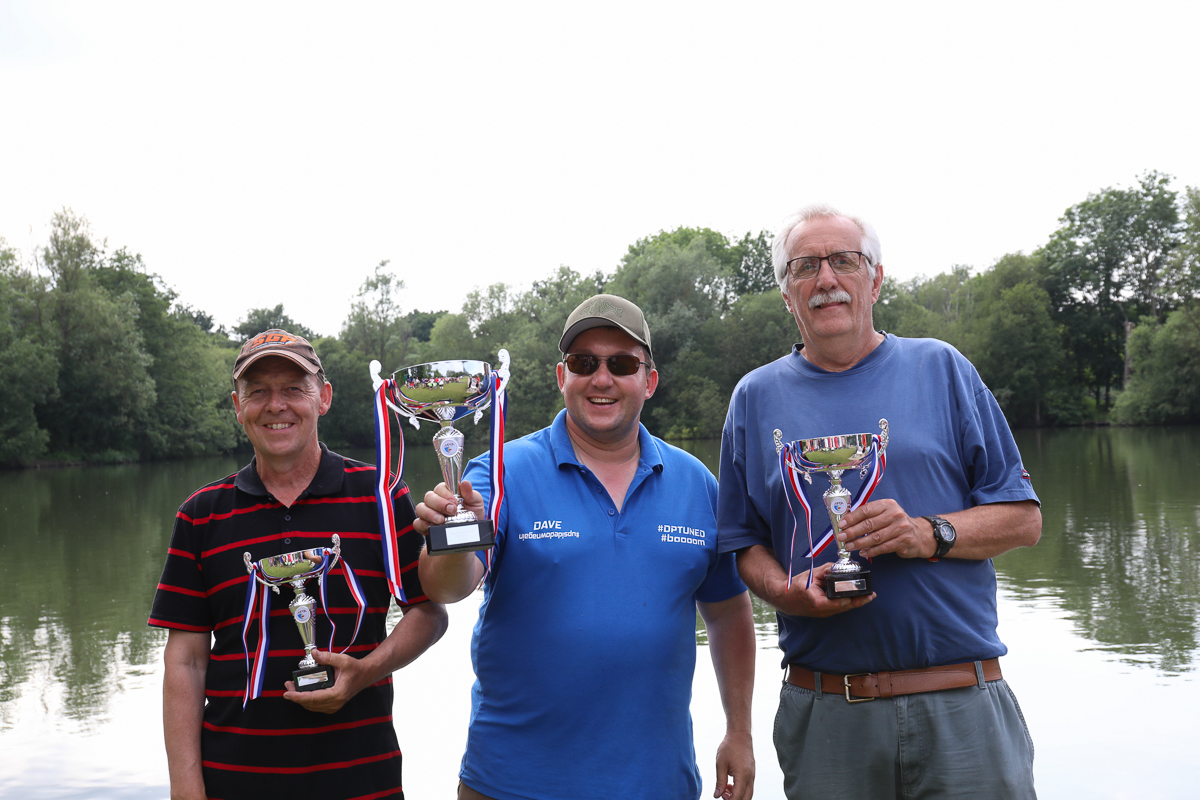 15cc
The 2nd Round of the 15cc class on Sunday saw some of the best and exciting racing of the weekend. Following an 11th hour panic on Friday over some missing bearings, Gary Wraight had ironed out most of the problems with his ageing 15cc Costa boat and was driving like a demon, shaving every buoy in an attempt to extract the best possible lap time. Gary reminded us a bit of former World Champion Frederick Cederberg of Sweden (Albeit several stones lighter) with his buoy to buoy precision. Trying to keep that up for 20 minutes non-stop is a big ask and Gary eventually spun out, losing several minutes and putting himself out of the running and finishing in 5th place overall. We guess that’s why Mr Cederberg was World Champion. Garys 18 points lifts him level with Phill Fields in 2nd place in the Drivers Championship on 75.
Dave Williams turned up with what looked like a giant Falcon, but was actually a Hungarian boat called a Gamma. It seemed to drive really but Dave had some mechanical issues. We look forward to seeing this boat in action again when the teething troubles have been sorted out. 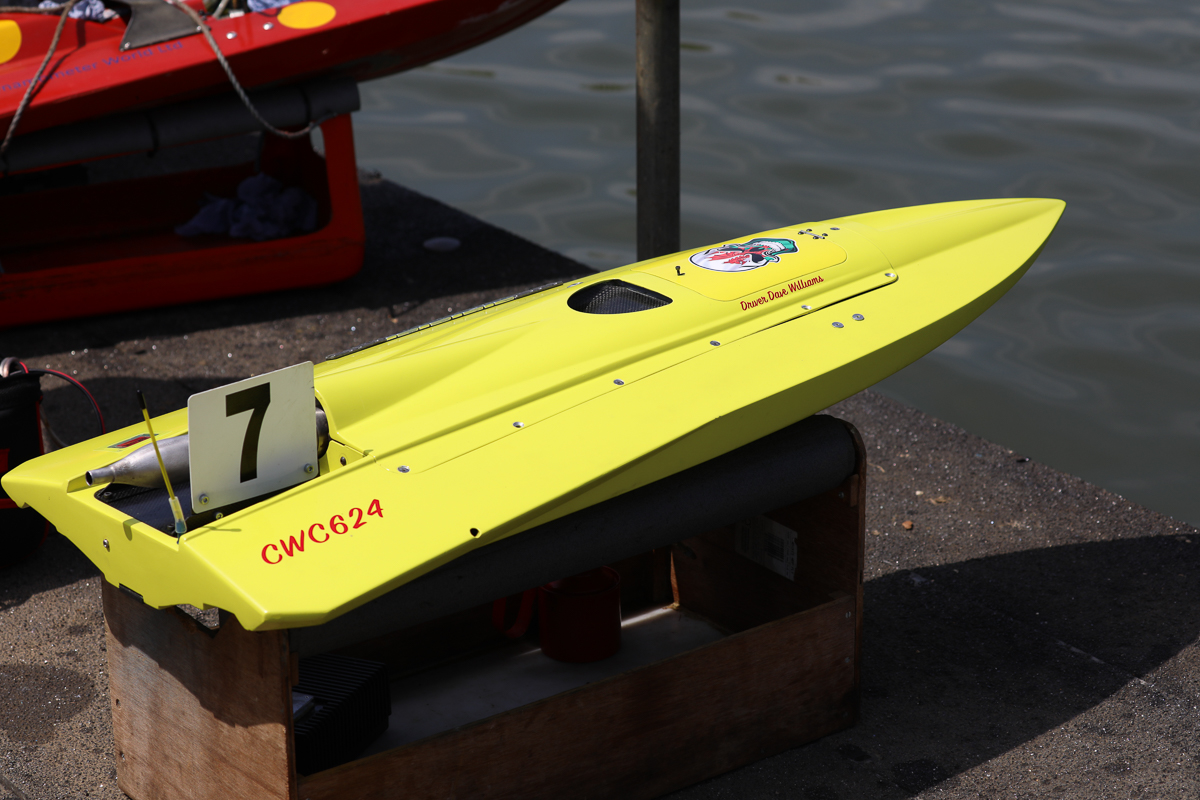 
James Taylor took the win with a superb display of attacking driving, racking up 66 laps and cementing his place as leader in the 15cc Championship by 22 points. Sam Lincolns Boudicca was as fast as we’ve ever seen it and without the occasional bogging we would have seen a much better total than his 2nd place 57 laps, 1 in front of 3rd placed Paul Adams. 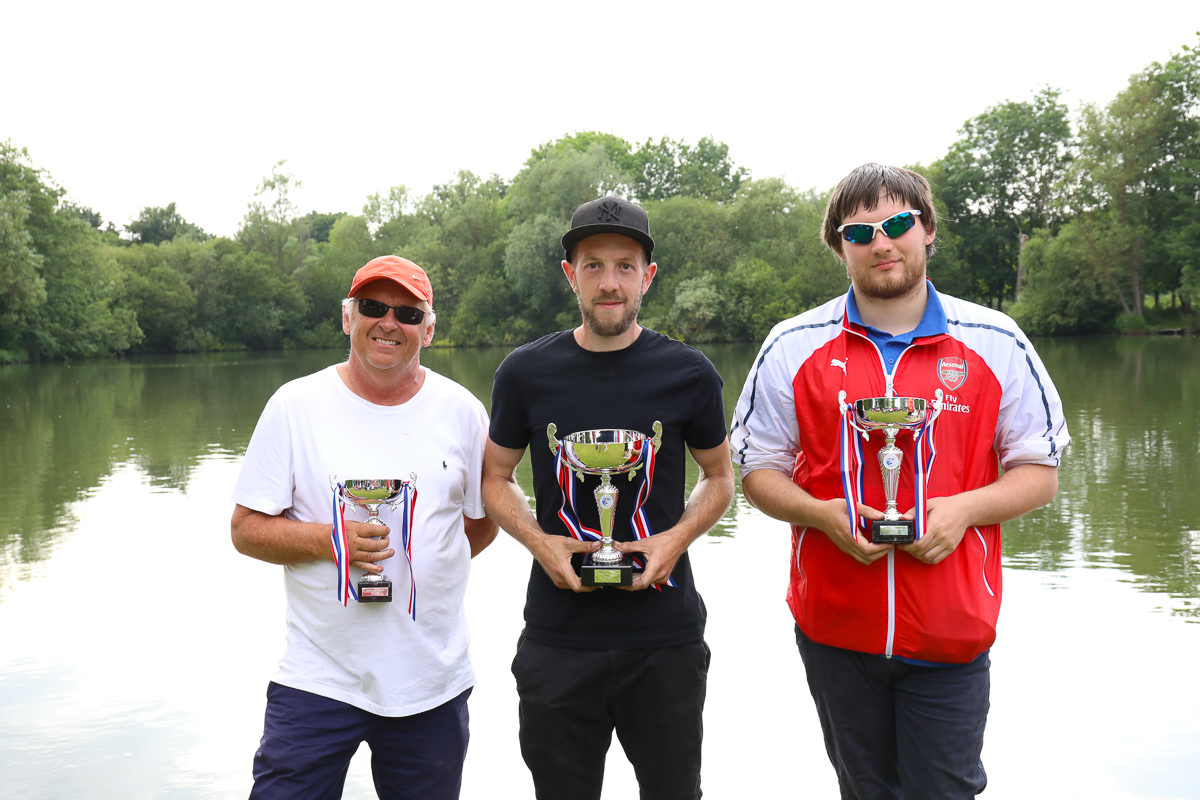 27cc
Fresh from his podium place in Haarlem, Ian Folkson swept to victory with his recently recovered Seljak boat which was stolen in 2016, declaring “This one actually handles better than then new one and I’ll probably use it at the World Championships!” James Taylor is rarely out of the top 3 in 27cc and took 2nd place after an intense battle with Ian for the win. This result extends James’ lead at the top of the Drivers Championship by 13 points over 2nd placed Mick Pain. James won’t be satisfied with 2nd though – He has his sights on the big prize at the Worlds and he will be working hard to extract even more performance from his Tiger King powered Tornado T7. 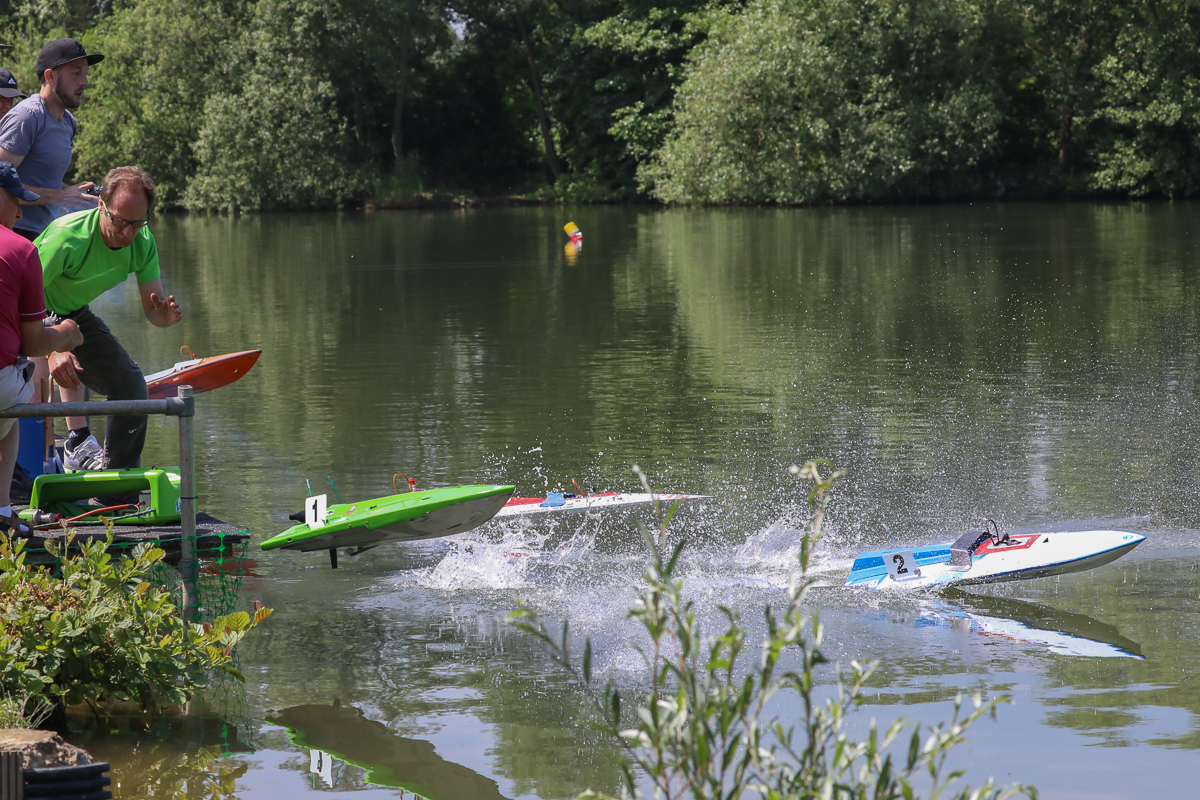 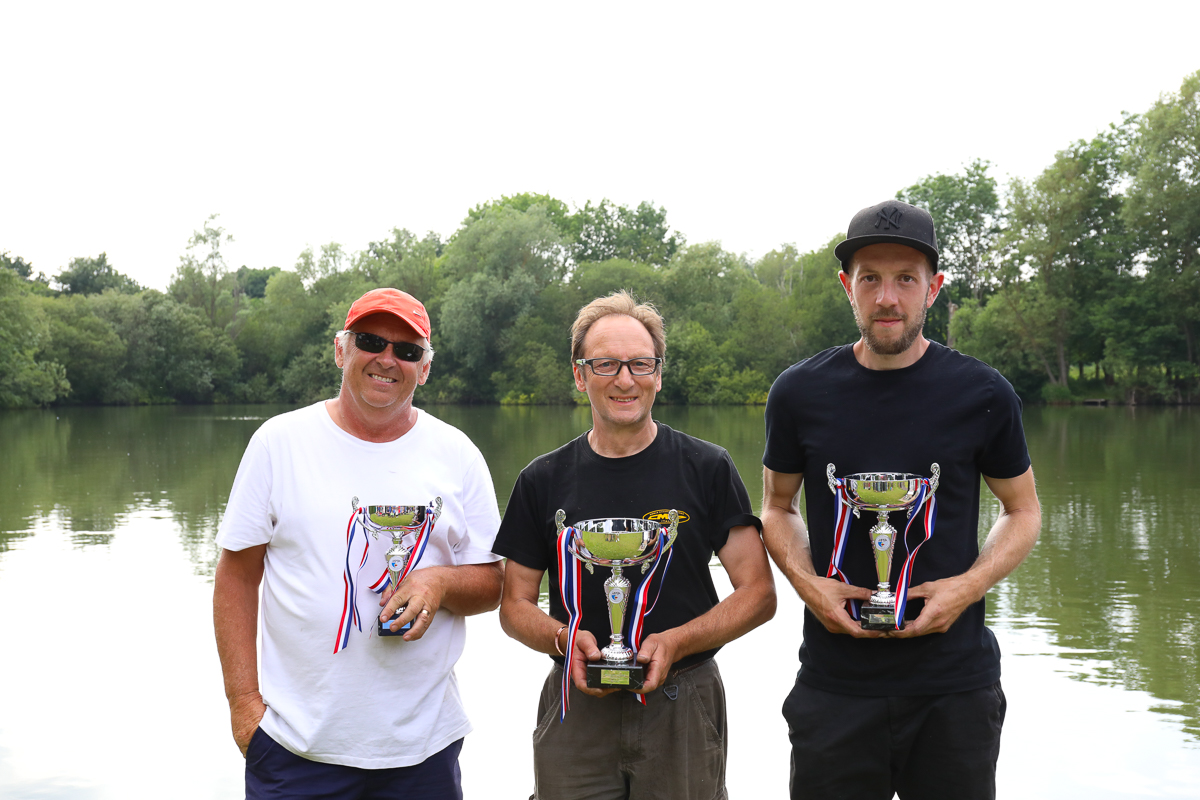 Circuit
Detailed Results
3.5cc Hydro
Both Dave Pillman and Keith Burgess rocked up with Eagle SGX Hydros, so we were hoping to a least see a race despite the absence of the rest of the LM Racing team. Unfortunately, Keith could not get his motor to come on pipe and could only navigate the course at a pedestrian pace. Speed merchant Dave blasted out of the traps at a million miles an hour only for his exhaust to blow out of the manifold several times. After each hasty repair, the same thing would happen. He finally solved it with a solid rather than rubber pipe mount and made the start in round 4. So 3 DNFs, but 425 points for making one start and finish. Keith took the win with 1,225 points.

All the 7.5cc Hydros [Click to enlarge, then scroll to see all] 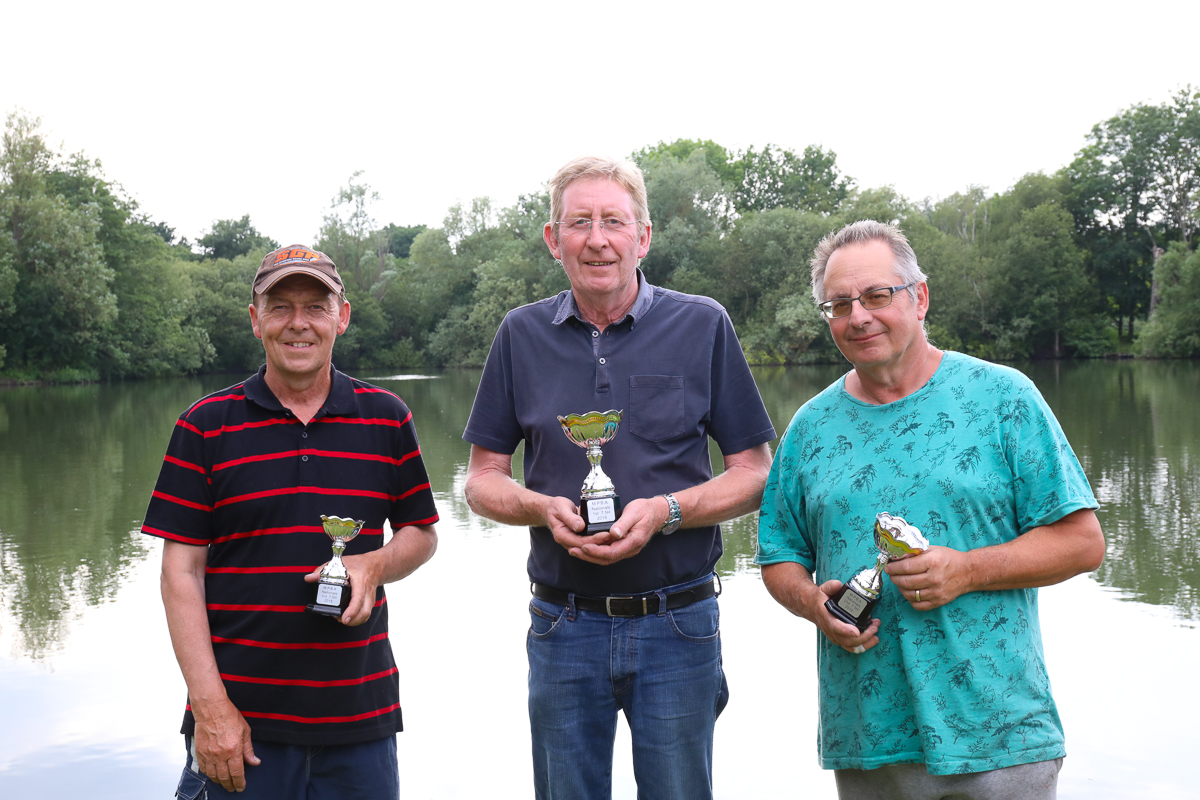 15cc Hydro
Dave Marles ran his gas rigger against Armen Boldys 15cc nitro powered hydro. Dave took the win with 1,100 points to Armens 800 but that wasn’t enough to dislodge Armen from the top of the Drivers table as Dave had missed round 2 earlier in the month. With Elmbridge being the only UK Circuit venue, it is not always easy for our Northern racers to get down South especially for one-day events. 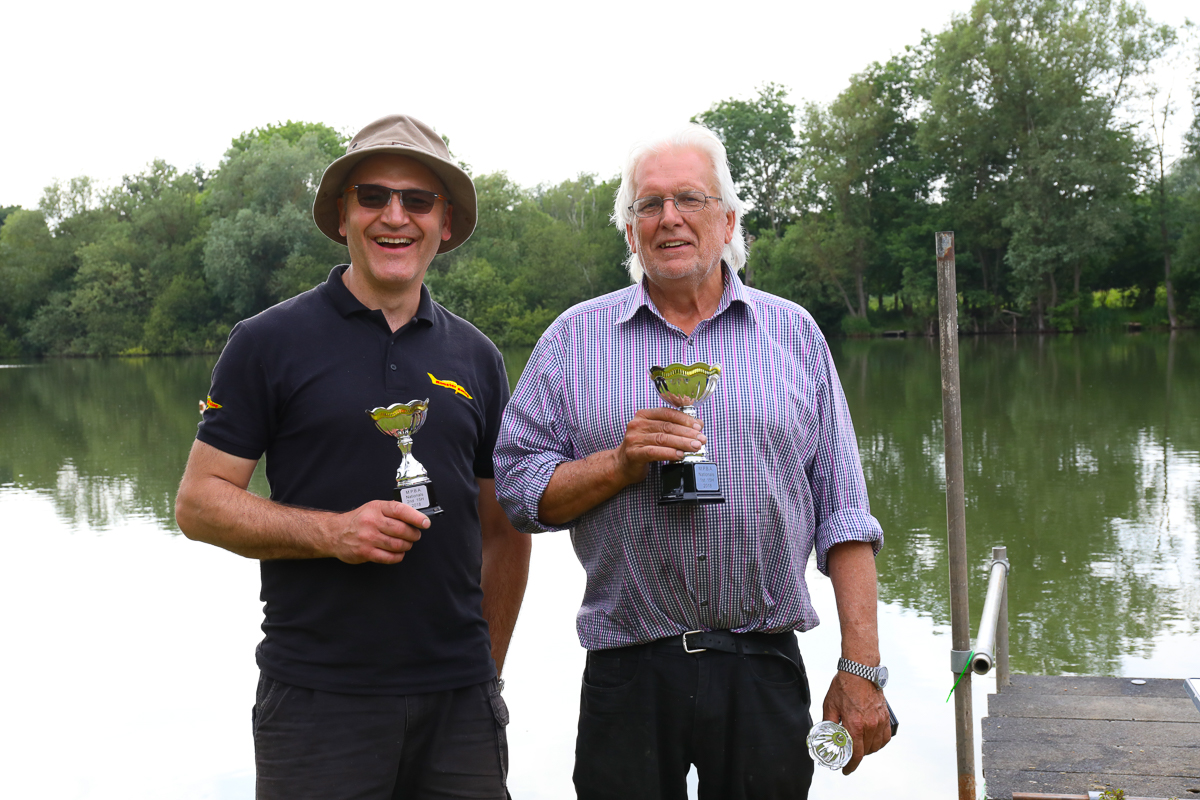 Offshore Points/Laps
The computerised results have inexplicably switched the 3.5cc, 7.5cc and 15cc offshore classes from points to laps for this event, so we don’t know what implications this has for the Drivers Championship tables. We are awaiting comment from the section organisers. Placings are not affected, just the tables.

3.5cc Mono
Here come the juniors! Our 3 juniors, Miha, Thomas and Luke locked out the podium today. Luke was questioning dad Keiths driving advice at one point asking why he should listen. To which Keith apparently replied with the immortal line “Luke, I am your father”. He shall henceforth be known as Darth Burgess. May the Delta Force be with you. 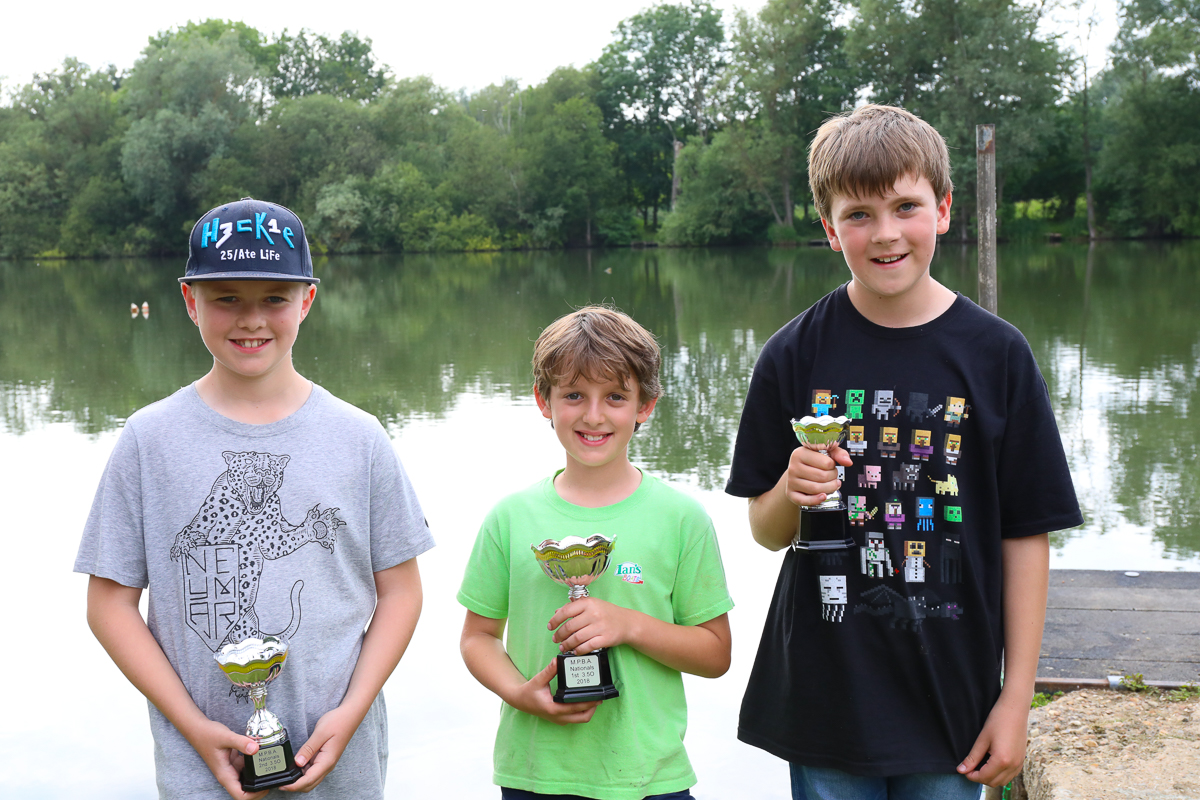 7.5cc Mono
Mick Buonaiutos Delta Force is looking good following his win in the previous round. Mick perhaps wisely chose not to run in all the rounds this weekend, avoiding any potential damage before the World Championships at the end of next month. This left Dave Marles and Chas Tedder fighting for the win. Some good racing in this class saw Dave take the overall win by 2 laps from Chas. It was good to see Vince Taylor racing again and we’re sure it won’t be long before son James gets Vinces boat performing well and fighting at the front. 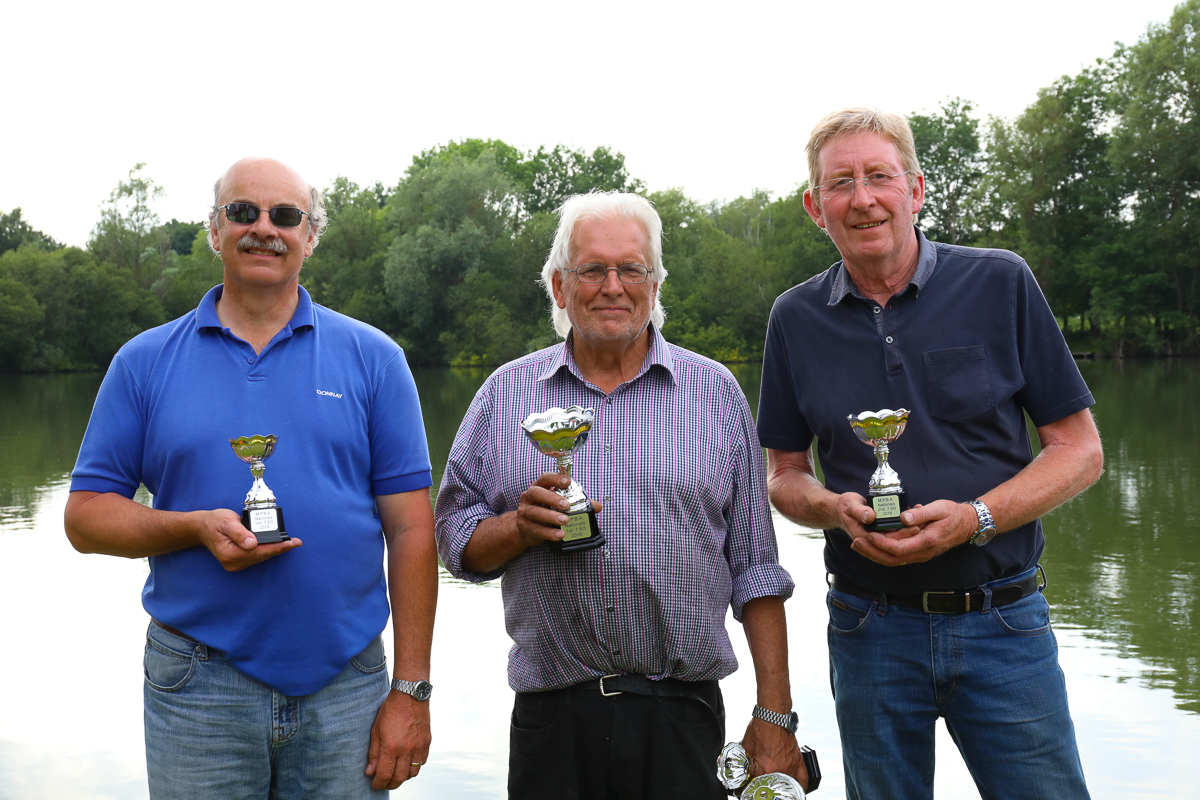 15cc Mono
It was a long journey from Bridlington for class winner Robert Daniel and he had to leave before the presentations. Without the confusion over points/laps, we could comment how this improved Roberts Championship position, but until clarification is received, all we can say is well done on 1st place! Les Wall took 2nd place, 8 laps down on Robert and Mark Rice grabbed 3rd finishing with the same laps as Les. 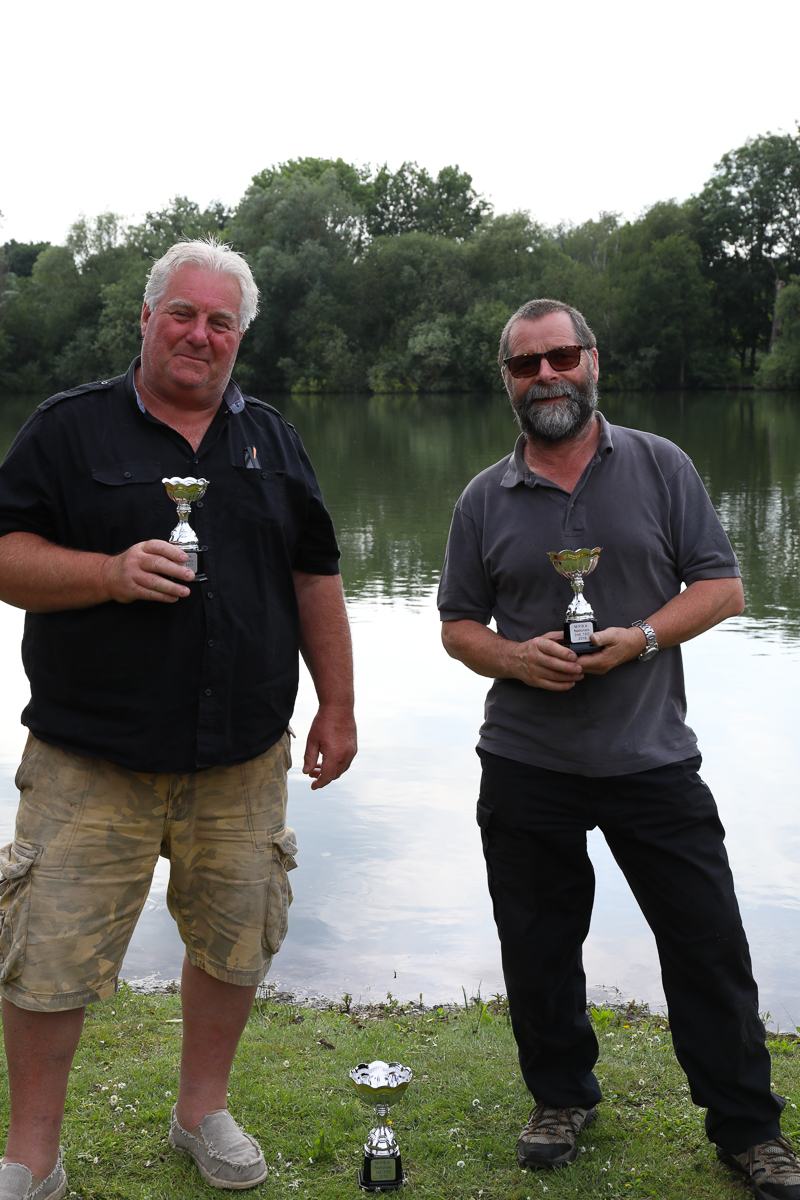 35cc Mono
This class saw some of the best racing of the day as Mark Wraight battled with Dave Marles for the win. Mark has built his new Kraken/Tiger King for the World Championships in France next month. The boat is looking fast and stable after it’s 2nd race weekend following Marks 2nd place in round 2 last month. Mark was especially pleased to beat Neil Ward and make it 2 out of 2, although he had expected a stronger fight from Neil and had to settle for Dave being his only real competition. Not bad for a rookie in this class.

All the 35cc Monos [Click to enlarge, then scroll to see all] 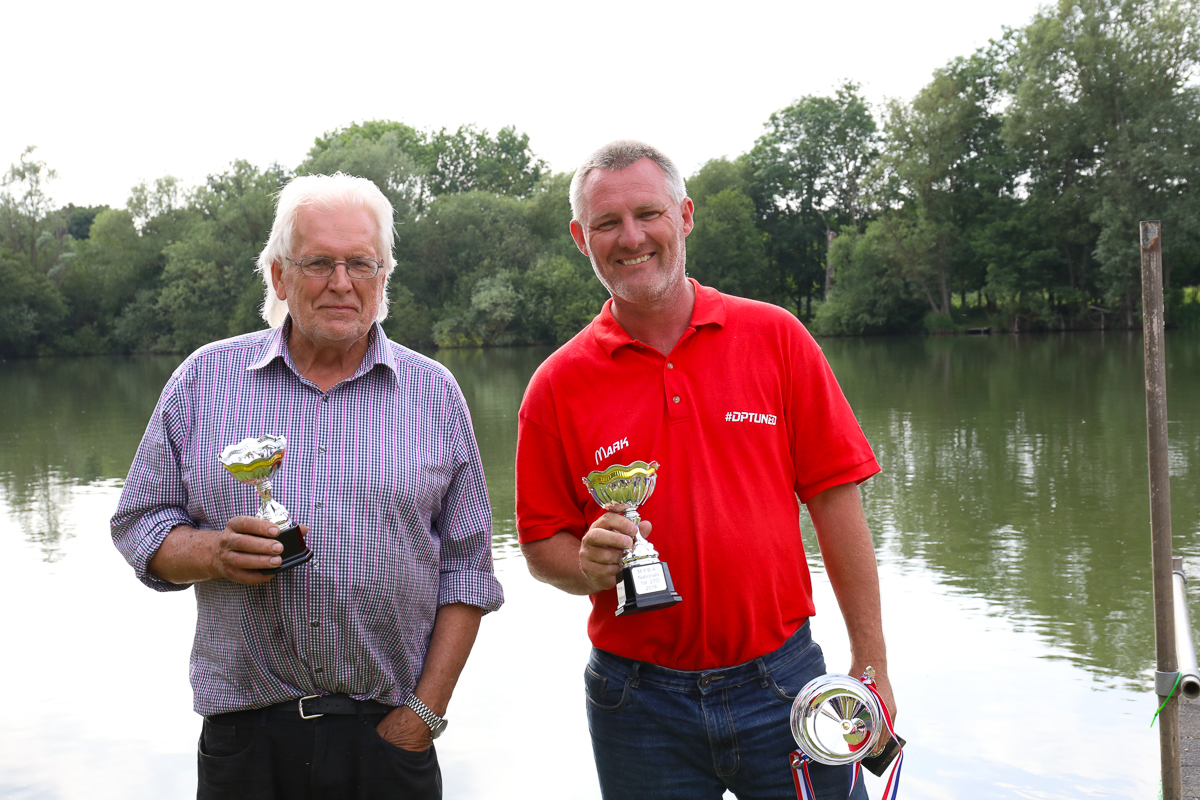 Sport 60
In the fun class, Les Wall extended his lead at the top of the table with the win today. Thomas retains 2nd place. 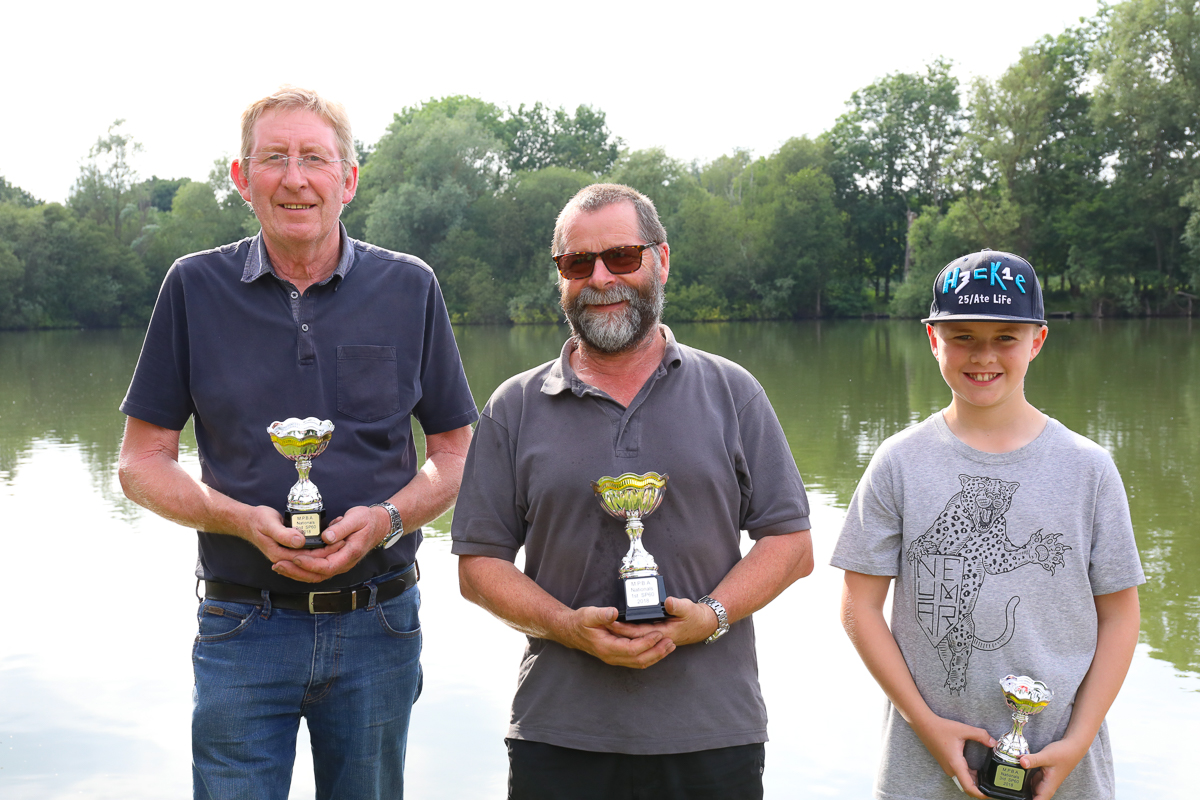