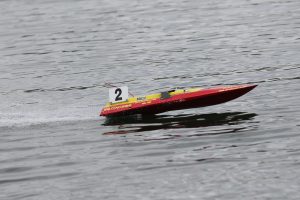 As the country basked in the mini-heatwave, the MPBA 2018 Endurance National Drivers Championship was hotting up at Elmbridge. This was the last race before the iMBRA World Championships in France, so some racers had elected to save their boats whilst others were making some final adjustments and tests. Although there were a few last-minute withdrawals, the overall numbers were pretty good with 14 x 3.5cc, 9 x 7.5cc, 7 x 15cc and 5 x 27cc.

3.5cc
The first heat did not require a single rescue boat intervention. This is very unusual and no doubt contributed to the best 3 lap scores being set in Round 1. Nobody was able to improve or beat these scores in Round 2, which was interrupted by a rescue boat failure. The race was stopped and restarted, but several people pointed out that there is a possible flaw in the rules in these circumstances – A boat which has nearly completed a lap when the race is stopped will lose that lap, then has to complete another full lap on the restart. This can result in a competitor losing nearly 2 laps compared to a stoppage-free heat. Would this have changed the result today? Probably yes. Andrew Aykroyd would have had at least one more lap and this would have put him on the podium and most likely given him the win. He didn’t do himself any favours though as he missed a buoy near the end resulting in a further 1 lap penalty. Unlike International events, UK rules do not allow circling of missed buoys, a rule brought in as the UK lakes are generally smaller than continental ones, and circling boats would potentially cause an unnecessary hazard.
With the top 4 boats all with 1 lap of each other, Leon Morgan took the win in the 2nd outing of his new Falcon. Leon said this was mainly a fuel endurance test for him before the World Champs and he was much less aggressive than at the Masters last month. He did turn on the afterburners towards the end of the race though and showed the boat has the speed necessary to do well in France. Nigel Smith grabbed 2nd place, his Ikarus 2 / Nova Keep proving fast and reliable. Mark Wraight took 3rd place, having reverted to the CMB pipe on his Falcon and regained his old speed.
Dave Clay had a tough weekend, breaking his Nova and stripping a gear, allowing Dave Hole to extend his lead at the top of the 3.5cc table, although the gap is only 8 points in reality after deduction of the worst score (8 out of 9 count, but with Maidstone cancelled, this season will be best 7 out of 8) 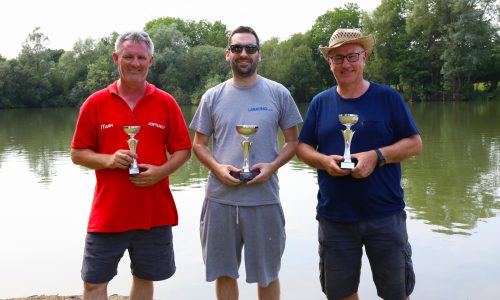 All the 3.5cc boats – Click to display full gallery

7.5cc
Could this be Dave Pillmans first title year? He certainly has the boat to do it and with others saving their boats for the World Championships, now is his chance. However, Dave himself thinks a bit differently and is all about trying to be the fastest. What we saw in Round 1 was some incredible racing between Dave and Andrew Aykroyd with their boats inches apart. This was only ever going to end up one way and it wasn’t that long until we were treated to a spectacular crash. Dave almost made up for this by winning Round 2, but in typical fashion snatched defeat from the jaws of victory by stopping one minute from the end!

With Dave Clay not running his 7.5 boat today, a gap has now opened up at the top of the 7.5cc table with Dave Pillman and Andrew Aykroyd a few points clear albeit with worst score deductions to come (Dave Clays DNS is his worst score deduction). Dave Humphries was as usual batting away with his hands tied by the lack of power from the OS .28XZ Truggy engine and finished a creditable 3rd, 3 laps behind winner Andrew. 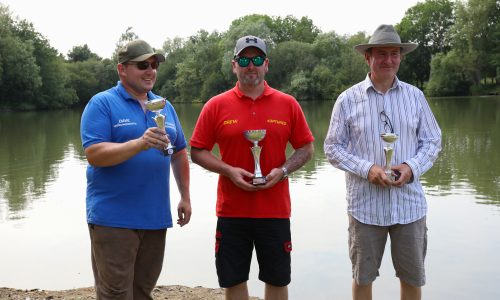 All the 7.5cc boats – Click to display full gallery

15cc
A surprisingly decent turn out in the 15cc class which has somewhat declined in popularity due to the extremely high cost of a competitive engine and the amount of fuel they consume. From the 4 GB Team qualifiers for France, only Sam Lincoln entered this event for the purposes of running in and testing engines. Both Sam and Gary Wraight tried as hard as they could to give James Taylor a run for his money, but another top drive from James claimed an emphatic win by 6 laps over 2nd place Gary. Can anyone stop James claiming a 9th Drivers title this year? We don’t think so, but with 120 points still to fight for in the last 3 races, anything can happen. Terry Holmes grabbed 3rd spot, but ended up with a [sg_popup id=”36″ event=”click”]broken crankcase[/sg_popup] on his CMB91. 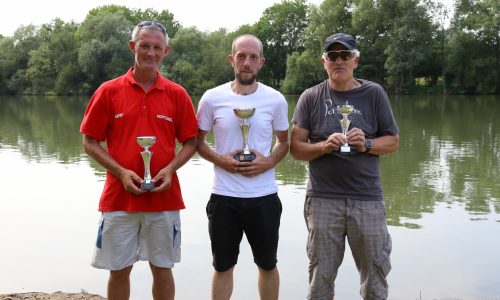 All the 15cc boats – Click to display full gallery

27cc
Another walk in the park for James Taylor, finishing 9 laps up on 2nd placed Paul Adams. Realistically, only Ian Folkson can consistently compete with James in the 27cc and he was unable to attend this weekend. Steve Baxter was testing a new build for the World Championships, but this didn’t go well after the boat turned over, lost the aerial cap and flooded the radio box. Some repairs and more testing required. No Dave Marles today after a scuba dive by Dean Lord to retrieve a boat from the bottom of a lake. Terry Holmes finished 3rd, a double-podium today to maybe cheer him up for the broken 91 engine. 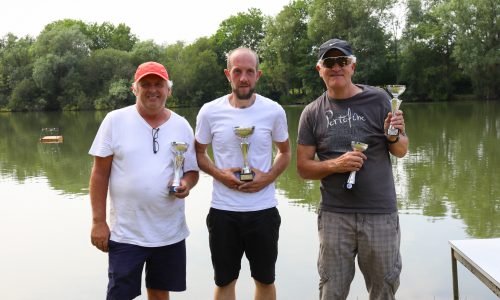 All the 27cc boats – Click to display full gallery